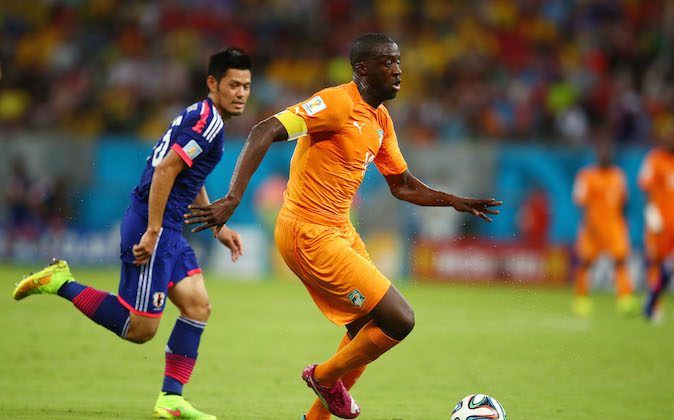 Yaya Toure of the Ivory Coast controls the ball against Hotaru Yamaguchi of Japan during the 2014 FIFA World Cup Brazil Group C match between the Ivory Coast and Japan at Arena Pernambuco on June 14, 2014 in Recife, Brazil. (Julian Finney/Getty Images)
Soccer

The Manchester City star injured his hamstring during the later stages of the English Premier League season.

Toure recovered in time to face Japan, but he finished the match with “pain all over his body.”

Ivory Coast were down 0-1 to Japan in the first half, and Toure spoke about how the veteran players managed to rally the team during the half-time break.

“Before the game, we felt a lot of nerves and anxiety,” Toure said.

“There was a lot of apprehension.”

“All the old players, starting with Kolo and Didier, spoke to both gee up and reassure everyone. Their words were strong. There was a lot of emotion in the room.”

“It was particularly important that neither Didier nor Kolo were starting the game. They reiterated the need to prove that the team was too good to write off.”

“I saw a flame rise up in the eyes of some of the youngsters,” Toure added.

Here is an AP preview of the Colombia and Ivory Coast game.