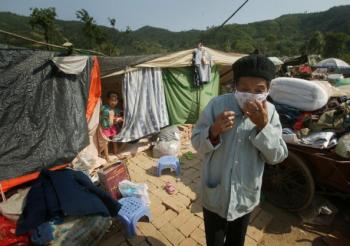 Photo shows survivors of the May 12 earthquake in temporary shelters in Qingchuan County of Sichuan Province, China. Qingchuan County was hit Tuesday by a 6.1-magnitude quake. (Getty Images)
International

Feng Yiran
View profile
Follow
biggersmaller
Print
Sichuan was rocked by a 6.1-magnitude earthquake on Tuesday which killed at least one and wounded 24.

The temblor occurred at 5:49 pm. local time at a depth of 10 kilometers (6 miles). The epicenter is Yaodu town, Qingchuan County where, according to a Xinhua report, one person died, five were seriously wounded, and 18 slightly wounded.

The fresh quake also caused the collapse of a major bridge in Wen County in the neighboring Gansu province, injuring one other person.

A reporter from chinanews.com felt strong shaking in Chengdu, capital city of Sichuan province, where the Olympic torch made its way through a few hours earlier.

This quake was the second major aftershock in 4 days in Sichuan, after a 6.1-magnitude quake hit on August 1.

The aftershocks follow the devastating May 12 earthquake which killed at least 70,000 people.