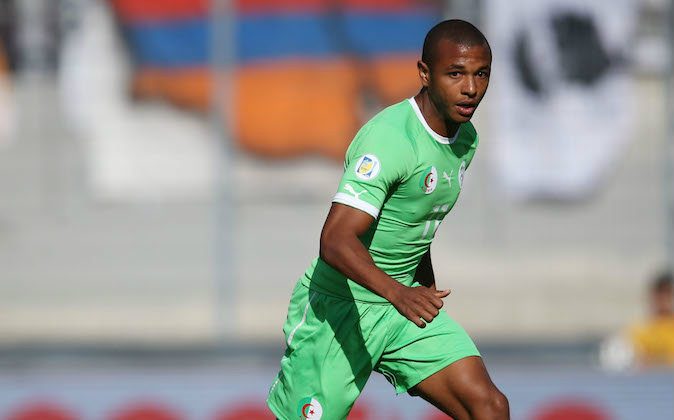 Yacine Brahimi of Algeria controls the ball during the international friendly match between Algeria and Armenia at Estadio Tourbillon on May 31, 2014 in Sion, Switzerland. (Photo by Philipp Schmidli/Getty Images)
Soccer

Granada midfielder Yacine Brahimi is being tracked by Tottenham and Everton.

According to Marca, both EPL sides are interested in the Algerian. It is uncertain if either side has formally approached Brahimi yet.

Brahimi joined Granada on loan from Ligue 1 side Rennes in 2012, and eventually signed for £3 million in 2013 after a series of impressive performances.

Clubs that are interested in Brahimi will have to pay £12 million due to the release clause in his contract.

Here is an Associated Press article.

BELO HORIZONTE, Brazil (AP) — Turning down the hype on Belgium as the clear favorite in Group H, Algeria’s coach risked insulting his opponents Monday by saying they’re not all “Ferraris.”

Belgium captain and center back Vincent Kompany may have something to say about Algeria coach Vahid Halilhodzic’s assessment, made on the eve of Tuesday’s match at Mineriao Stadium in Belo Horizonte.

“With the Belgian defense, they are not all Ferraris either, you know,” Halilhodzic said, going on to refer to some of the players as being more like a cheaper, slower brand of car. “Belgium does have a certain weakness here.”

Before Halilhodzic’s comments, Kompany had some praise for Algeria.

“They have a good team,” he said. “They are dangerous offensively, that is true. But we have strong organization. It will be like a chess match.”

Algeria’s disciplinarian coach acknowledged that his players must suffer on the pitch if they have any chance of repeating the north African country’s famous 1982 upset of West Germany.

But Halilhodzic is letting his players relax in the final hours before the match.

“This is a very touchy phase in the preparation,” Halilhodzic said. “I think you have to be positive. In a certain phase, you must be tough and hard.

“If you want a positive reaction, you have to poke them a bit,” he added. “If you poke the Algerian players, they explode. They get positive energy.”

Algeria faces what some are calling Belgium’s best-ever team.

“If we succeed, it will be one of the greatest wins in Algerian history,” Halilhodzic said. “It could be compared to the match against Germany more than 30 years ago.”

Halilhodzic said his players mustn’t let their guard down during the match or they will be punished.

“If we do not suffer, there’s no hope,” Halilhodzic said. “If some people just walk around the pitch without running, that’s a problem. If they don’t perform at a tournament like the World Cup, it’s the worst thing they can do for themselves.”

Halilhodzic has had a testy relationship with Algeria’s media of late, because they feel he has experimented too much with the squad and tested two sets of players.

“I think I am the most criticized person in all of Algeria, even after we qualified for this World Cup,” he said. “They have even insulted my family. This is not something I can tolerate.”

No one is sure what his starting lineup will be and he refused to budge at Monday’s news conference.

Algeria has a very young and inexperienced team. But fledgling stars in the making, including central midfielder Sofiane Feghouli, who has a sharp first touch and excellent passing skills, and striker Islam Slimani may just be able to produce an upset.

“We have 90 minutes on the pitch,” Halilhodzic said. “We’ll see what happens then. Belgium is the favorite. But favorites don’t always win.”