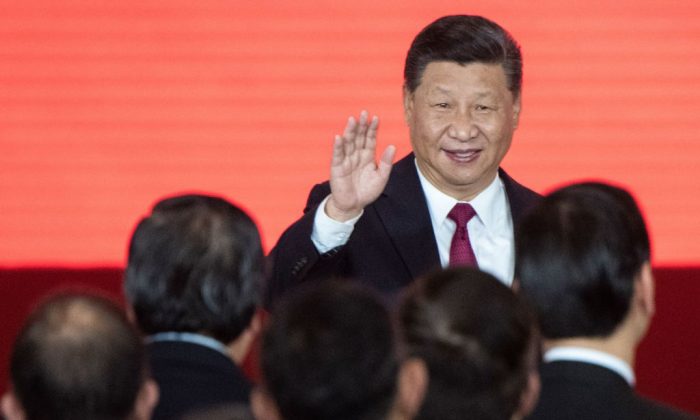 Chinese leader Xi Jinping’s comments—and lack thereof—during a tour of southern China hint at the Beijing leadership’s anxieties about the current state of the country’s economy.

During the opening ceremony on Oct. 23 for a bridge connecting Hong Kong, Macau, and the southern Chinese city of Zhuhai in Guangdong Province—the world’s longest sea bridge—several Chinese officials gave speeches, including Li Xi, a member of the Chinese Communist Party’s (CCP) elite 25-member Politburo and party chief of Guangdong; Han Zheng, a member of the Politburo Standing Committee, the Party’s most powerful decision-making body; Carrie Lam, head of Hong Kong’s government; and Fernando Chui, head of Macau’s government, according to an Oct. 23 report by China’s state-run media Xinhua.

But when it came time for Xi to formally announce the bridge’s opening, he simply stepped to the podium and said: “I pronounce, the Hong Kong-Zhuhai-Macao bridge is officially open.” He didn’t give a speech, as was expected.

Construction of the bridge, 55 kilometers (about 34 miles) in length, began in December 2009. It is part of Beijing’s plans to make the Pearl River Delta region an economic hub similar to the San Francisco Bay in the United States, or Tokyo Bay in Japan.

The event was part of Xi’s tour of southern China, the second time he’s embarked on such a trip since becoming head of the CCP in 2012. These southern tours come with great political implication: They are widely considered a replica of former Party leader Deng Xiaoping’s famous tour to Guangdong in 1992—a critical point in Chinese history that marked Beijing’s commitment to economic reform policies, initiated in 1978, to open up the country to foreign businesses and investment.

Xi’s trip in December 2012 was seen as the Party leader’s message that economic reform was at top of his agenda, given that he paid tribute to Deng’s statue in Shenzhen City, an economic hub that served as the Party’s first experimental grounds for market reforms.

But with the Chinese economy recently performing badly, Xi may have conducted the tour to quell growing anxiety among the country’s economic sectors. China posted the slowest GDP growth—6.5 percent for the third quarter—in nine years, according to China’s National Bureau of Statistics’s latest numbers on Oct. 19.

China’s stock market is also slumping. The Shanghai Composite Index, already the worst performer among the world’s major benchmarks in 2018, fell recently to its lowest point since 2014.

The day before the Hong Kong ceremony, Xi first visited an industrial park in Hengqin District of Zhuhai, which is home to science, high-tech, and traditional Chinese medicine businesses. Then, he paid a visit to facilities belonging to Gree Electric Appliances, a major Chinese appliance manufacturer, according to Xinhua.

At Gree, Xi made comments explaining the importance of China’s manufacturing sector.

“The core of the manufacturing sector is innovation, which is about owning key core technologies. We must rely on ourselves. … I hope all companies will work in this direction,” he said, according to Xinhua.

Being technically self-reliant is the crux of Beijing’s “Made in China 2025” economic plan, which calls for China to not only become technically self-sufficient by 2025 in 10 key high-tech sectors, but ultimately dominate global supply chains. However, China still lags in developing many key technologies, such as semiconductor chips, which are used to power practically every electronic device.

By visiting these companies, Xi’s southern tour was intended to make a fuller statement about the CCP’s intentions to carry out economic reform, according to Li Fong, secretary-general of the Hong Kong Research Center on Asia Pacific Studies, in an interview with Taiwan’s Central News Agency (CNA).

Xi’s visit to Gree wasn’t a coincidence, according to Lin Jiang, an economics professor in at Lingnan University in Guangdong.

In an Oct. 23 article by Hong Kong media LinePost, Lin explained that Gree is a state-owned company, but is run in similar fashion to a private firm. Consequently, Beijing is sending a message that it wants to see more cooperation between state-run and private companies, to boost the competitiveness of different Chinese sectors.

But, going by Lin’s interpretation, Beijing’s plans run contrary to economic reforms. Rather, it is more state interference in the private sector as China marks the 40th anniversary of Deng’s reform policies this year.

According to Chinese financial media outlet Caixin, more 20 private companies in China received investment from state-owned enterprises this year. Beijing has encouraged such investments in the 13th Five Year Plan, which was announced in 2016.

One example was Kingee Culture, a Beijing-based jewelry design and manufacturing company. In July, one of the company’s majority stockholders, Bikong Longxiang, a Beijing-based asset management company, sold 73.32 percent of Kingee’s shares for just 1 yuan (15 cents) to the state-owned HKJ Group.