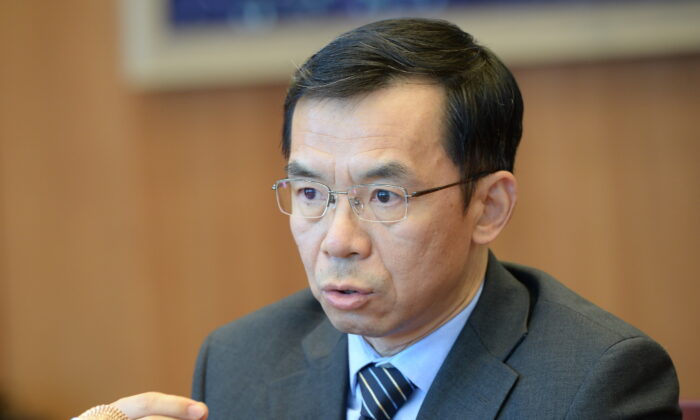 Chinese ambassador Lu Shaye meets with media at the Embassy of the People's Republic of China in Ottawa on Jan. 17, 2019. (Sean Kilpatrick/The Canadian Press)
International Relations

The outspoken Chinese ambassador to France fell silent after Chinese leader Xi Jinping spoke to French President Emmanuel Macron on the phone on Oct. 26. The call came ahead of France’s appointment to the rotational European Union presidency in January 2022.

According to Chinese publication Legal Daily, Xi said that the Chinese Communist Party (CCP) attaches great importance to developing ties with France and wants to restore relations with them and Europe overall.

Experts have said that the political rhetoric from certain Chinese ambassadors are working contrary to the Chinese regime’s goals.

A day prior to the Xi–Macron call came the latest incendiary comment from China’s “wolf-warrior” ambassador to France, Lu Shaye. Wolf-warrior diplomacy is a recent tactic employed by the CCP, attacking principles of free societies with aggressive party-line rhetoric.

On Oct. 25, Lu accused Le Figaro’s Asian correspondent Sebastien Falletti of being “full of lies and ramblings” and being “complacent” toward the Taiwanese government. In two articles, Falletti focused on the Taiwan Strait and cast the island’s vibrant democracy in a favorable light.

“The Chinese ambassador in Paris, who represents one of the worst regimes in the world in terms of press freedom, is extremely ill-positioned to give journalism lessons,” said Reporters Without Borders Secretary General Christophe Deloire in an Oct. 28 statement. “If Lu Shaye thinks the French press is too independent for his taste, he is free to request his transfer to an authoritarian country, such as North Korea.”

Deloire called on Lu to put an end to his “impassioned rants.”

In an interview last June on Chinese media outlet Sohu, Lu said he was proud of his wolf-warrior style of diplomacy. He said he viewed himself as clamping down on “anti-Chinese forces,” a broad term for people who support free societies.

Lu has insulted France’s free press multiple times. On four prior occasions, the French Foreign Ministry summoned Lu over repeated violations of diplomatic protocols. In addition to lashing out at the media, he has launched verbal attacks against French parliamentarians and academics.

In March, Antoine Bondaz, a researcher with the French Foundation for Strategic Studies, denounced Lu on Twitter over his criticism of the French democratic system and elected officials. Lu responded by calling Bondaz a “hooligan.”

One month prior, Lu sent a letter to French senator Alain Richard asking him to prevent four French officials from visiting Taiwan. Richard denied the request.

Liu Weimin, chairman of the European and Paris branches of the China Democratic Party, told The Epoch Times that due to the different political systems of the two countries, the French government could become hesitant to make official statements due to this style of wolf-warrior diplomacy. Liu said that the aggressive comments could damage French parliamentarians, academics, and the perception of China, resulting in deteriorating relationships between the two nations.

According to the Japanese commentator Gao Feng Yi, Lu’s belligerent style of diplomacy has backfired and made the French community see the CCP in an unfavorable light. He added that though other Western countries like France, Canada, and New Zealand have had ambivalent relations with the CCP, they too are beginning to see the evil threat posed by the regime.