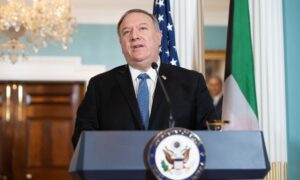 Xinjiang Genocide Means US Firms Can’t ‘Continue to Deceive Themselves’ About China: US Commissioner

By Jan Jekielek and Cathy He
biggersmaller
Print

The Trump administration’s determination that the Chinese regime is committing genocide against Muslim minorities should cause American companies to rethink their business in the country, said Commissioner Gary Bauer of the U.S. Commission on International Religious Freedom (USCIRF).

The declaration made by former Secretary of State Mike Pompeo indicates that “what the Chinese communists are doing is trying to eliminate a whole people—in this case, Chinese Uyghur Muslims, to literally wipe them off the face of the earth,” Bauer said in a recent interview on The Epoch Times’ “American Thought Leaders” program.

In explaining his decision, made on the last full day of the Trump administration, Pompeo cited Beijing’s expansive repressive practices targeting ethnic Muslim minorities in the far-western Xinjiang region, including detaining more than one million Uyghurs and other Muslim minorities in concentration camps, and its campaigns of forced sterilization, forced labor, and mass surveillance.

The commissioner said he hoped the move in particular sends a signal to those in the United States who “continue to deceive themselves” about doing business with China.

Bauer also pointed to American universities who continue to partner with the regime.

“I think what they end up doing is ultimately losing any credibility those universities have, as being places that respect human rights and human dignity,” he said.

Last year, the Department of Education found that universities received almost $1.5 billion in contracts and gifts from China from 2014 to 2020.

Beijing has built a massive domestic surveillance apparatus to control and repress religious believers across the whole country, Bauer said. Through artificial intelligence-enhanced surveillance, the regime is able to monitor citizens for activities banned by the regime, such as attending a church, and then deprive that person of services or economic opportunities.

“So this is a level of persecution of religious believers that other tyrants around the world can only dream of having.”

The Chinese communist regime is also exporting this model around the world to create an “authoritarian bloc”—a group of countries that depend on Chinese technology, finance, and military support—that could rival Western democracies, he said.

The regime, Bauer said, could set itself “as an example to other dictators of how you can have economic growth, you might be able to improve the lot of your people…bringing them into the modern world, but you can do it while still denying them the basic human rights and human dignity that every human being deserves.”

The commissioner expressed hope the Joe Biden administration would continue former President Donald Trump’s tough-on-China approach, adding that the task would be a long-term one spanning many administrations to come.

The China problem “is a hole that we’ve gotten ourselves in over the last 30 or 40 years. And it’s going to take several decades to get out of it,” he said.