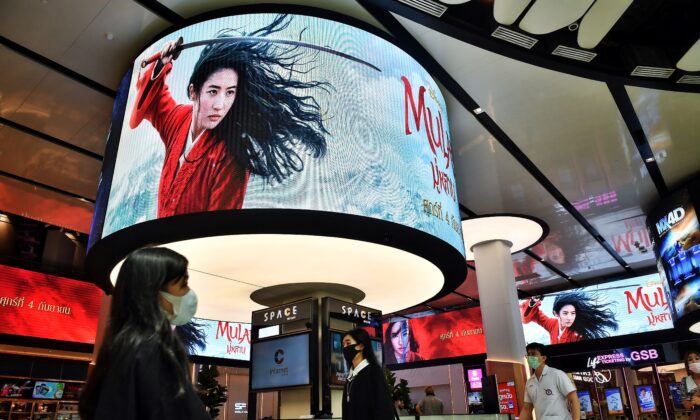 People walk past advertising displays for Disney's Mulan film at a cinema inside a shopping mall in Bangkok on Sept. 8, 2020. (Lillian Suwanrumpha/AFP via Getty Images)
China-US News

Calls to Boycott Disney’s ‘Mulan’ Mount Over Links to Xinjiang

Disney is drawing fire for shooting parts of its live-action remake of “Mulan” in the Chinese region of Xinjiang, where a million Uyghur Muslims are being detained in internment camps.

The film’s credits thanks several government agencies in the northwestern region, including the police bureau in Turpan, a city in eastern Xinjiang, as well as the “publicity department of CPC Xinjiang Uyghur Autonomy Region Committee,” the propaganda department in the region.

The Turpan public security bureau was last October put on the U.S. commerce department’s trade blacklist over its involvement in the regime’s repression of Uyghur Muslims.

Since last year, the film has faced calls for a boycott after the lead actress Chinese-born Liu Yifei expressed support for Hong Kong police, who have been accused of violence against pro-democracy protesters in the city.

The film, released on Disney+ over the weekend, is the Hollywood telling of a historical tale, “The Ballad of Mulan,” that depicts an ancient Chinese heroine who disguises herself as a man to serve in the army in the place of her ailing father.

Disney did not respond to a request for comment.

More than one million Uyghur Muslims and other minority Muslims are being detained in camps across Xinjiang, as part of Beijing’s purported crackdown on “extremism.” Survivors of the internment camps have recounted being subject to torture, rape, and political indoctrination while detained. Xinjiang residents are also subject to an expansive system of surveillance through a network of AI-enhanced security cameras, checkpoints, and the collection of biometric data.

The film’s production designer, Grant Major, recently told Architectural Digest that the production team spent months in and around Xinjiang to do research before shooting began. Mulan director Niki Caro in 2017 posted a photo of a desert on her Instagram with the location tagged as “Asia/Urumqi”—the capital of Xinjiang—with the description “Day 5—China Scout.”

Activists stepped up calls for a boycott after these revelations emerged on social media over the weekend.

“It just keeps getting worse! Now, when you watch #Mulan, not only are you turning a blind eye to police brutality and racial injustice (due to what the lead actors stand for), you’re also potentially complicit in the mass incarceration of Muslim Uyghurs,” prominent Hong Kong pro-democracy activist Joshua Wong wrote in a tweet on Sept. 6.

Disney is not the only American company to have sparked a backlash over its links to Xinjiang. In July, an ESPN investigation revealed that Chinese coaches at the National Basketball Association’s (NBA) youth training academy in Xinjiang physically abused players. The NBA later confirmed that it had terminated its relationship with the academy but did not state whether it was because of human rights abuses.

In February 2019, Massachusetts-based lab equipment maker Thermo Fisher Scientific announced that it would stop selling DNA sequencers to Xinjiang, after receiving criticism from U.S. lawmakers that its products were used by Chinese authorities to identify individuals in its campaign of suppression.

Pressure has also been mounting on international clothing brands to cut ties with factories in Xinjiang, particularly after researchers in March found that tens of thousands of Uyghurs have been transferred to work at factories across China in conditions suggestive of forced labor. Those facilities manufactured goods for 83 global brands.

Meanwhile, the Trump administration has escalated measures to punish the regime over its abuses in Xinjiang. Several Chinese officials and the paramilitary group in the region have been sanctioned, while dozens of Chinese entities and companies have been blacklisted from doing business with American firms.