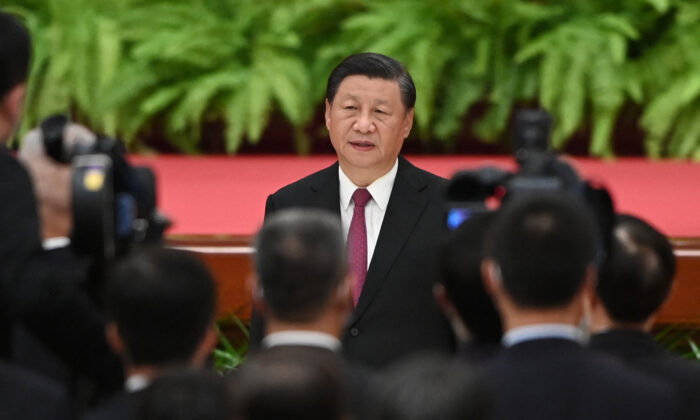 Chinese leader Xi Jinping sings the national anthem during a reception at the Great Hall of the People on the eve of the 72nd anniversary of the Chinese Communist Party's takeover of China in Beijing on Sept. 30, 2021. (Greg Baker/AFP via Getty Images)
Thinking About China

Xi Jinping’s Rule Is Contingent on a Weak US Response

A great boxer can take a punch. In the rough and tumble of international politics, states and their leaders must be able to as well. It’s an open question whether China’s Xi Jinping could.

Like a boxer with a glass jaw, as the leader of the Chinese Communist Party (CCP), Xi cannot handle major reverses because any setback—a major diplomatic or military defeat—can introduce the possibility that his rule will be delegitimized.

We have been here before. At the dawn of the Cold War, U.S. diplomat George Kennan identified a fundamental truth about communist regimes in the “Long Telegram” of February 1946. Written when Kennan was stationed in Moscow, he perceived that defeat—that is, the inability of the Bolsheviks to expand their revolution—causes a lack of legitimacy and ultimately the failure of communist rule.

Were Xi to suffer reverses, this would deepen divisions in the CCP’s leadership. Senior Party leadership would be fearful that defeat will lead to the loss of legitimacy of the CCP and would seize on the opportunity to rid themselves of Xi. Defeat or major setbacks to his global ambitions might lead to an inter-CCP or a People’s Liberation Army (PLA) challenge to Xi’s leadership.

Were Xi to fall from power, the possibility of significant political change in China would then be introduced. Such a change would present major unknowns, but a Donald Rumsfeldian “known unknown” would be the opportunity for the Chinese to free themselves from the fetters of the CCP, move beyond its rule, and permit democratic rule in China.

This positive future for the Chinese people is contingent on the United States resisting the Chinese regime with all means at its disposal. Defeating Beijing’s expansionism clearly requires an expanded U.S. military presence in the Indo–Pacific, working in conjunction with major allies such as Australia, India, Japan, and Taiwan. The Chinese regime’s seizure of the South China Sea must be reversed, Taiwan protected, and further attempts at expansion against India or other states defeated. But it also comprises political warfare, identifying and defeating the CCP’s efforts to influence the domestic politics of the U.S. and its allies, while simultaneously advancing the West’s response within China and globally.

The West’s ideology is its most powerful weapon against Xi and the CCP: Freedom and democracy are superior alternatives to the CCP’s corrupt rule, oppressive politics, endemic human rights abuses, and predatory economics. Moreover, economic infrastructure projects such as the Belt and Road Initiative (BRI) must be countered and co-opted. As a start, the United States and its allies must insist that countries at the termini of the BRI deny entry to goods produced by forced labor in China, particularly by Muslims in Xinjiang, or by firms that have any direct or indirect association with companies that traffic in these goods or products.

The Chinese regime’s plan is clear—domination through the expansion of its military, but also simultaneous diplomatic, economic, and technological advancement. Its success—and thus Xi’s rule—requires that there is no effective counter by the United States and its allies. Xi and the CCP must be defeated by denying them successes and challenging them directly. But the United States must develop a strategy of victory. This will be multifaceted, but must include targeting the legitimacy of Xi as a leader as well as the CCP regime. The formulation of a strategy of victory over China is the highest and most urgent responsibility of the U.S. and allied leadership.

For far too long, Western policies of accommodation have emboldened Xi, his predecessors, and the sustained growth of China’s power. The United States still has time to act, but that window is closing. The greater the accommodation with Beijing, the faster that window will close. As regrettable as it is, direct confrontation with the Chinese regime is the necessary and only option available to the United States to defeat Xi’s ambitions.

If the United States is to maintain its position as the dominant country, U.S. and allied leadership must understand that they can and should defeat the challenge posed by the CCP. This recognition is not misplaced. The United States has many advantages over China, including its political principles, dynamic population, an open society, adaptive and innovative economy, rule of law and low levels of corruption, its universities and financial sector, military might, robust intelligence community, diplomatic acumen, and worldwide network of alliances. China has notable advantages to be sure, and they need to be checked, equaled, or exceeded.

Fundamentally, the Biden administration must follow the Trump administration’s China policy and conclude that competition is the correct path of action, and that a U.S. victory is possible.

The United States must squarely face the threat from the Chinese regime. This includes, first, charting the course to victory; second, publicly acknowledging that it is not just a threat, it is the enemy of the United States and its allies; and third, mobilizing resistance to it.

Not terming the CCP as an enemy of the United States for fear of worsening the current cold war does not prevent the Chinese regime’s challenge, but perversely helps it. In the history of the United States, grand strategic victories were anchored on a clear understanding of why Americans were fighting the conflict and why the United States would win it. As Kennan recognized, if your enemy is a communist regime, then the Party will be fearful of its own hold on power.

In sum, your enemy has a glass jaw. Thus, resisting his depredations and offenses isn’t only the right moral choice, but also a compelling strategic one.