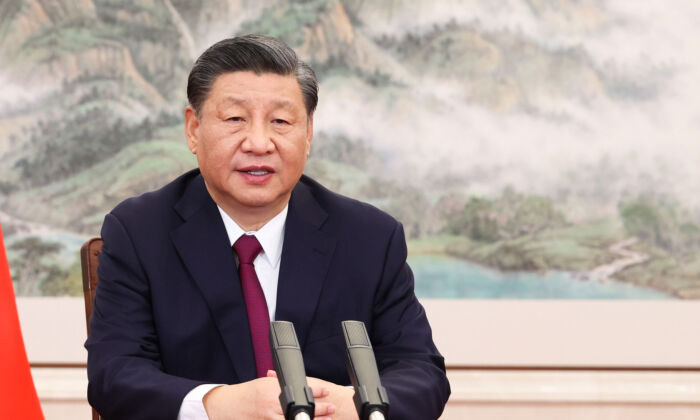 Chinese leader Xi Jinping delivers a speech via video link to the opening ceremony of the Bo'ao Forum For Asia in southern China's Hainan Province on April 21, 2022. (Huang Jingwen/Xinhua via AP)
Thinking About China

Debunking some of Beijing's recent lies

There is an old adage to which many people subscribe: “How do you tell if a politician is lying? When his lips move.” If “communist” is substituted for “politician,” the accuracy of the adage increases to over 95 percent of the time.

Let us examine Chinese leader Xi Jinping’s latest whoppers that have been dutifully amplified and propagated by state-run Chinese media.

On June 27, Xi made a pitch for soliciting public opinion on issues in preparation for the upcoming 20th National Congress that will be held this fall. According to China Daily, Xi claimed that “collecting public opinions online is an example of the whole-process people’s democracy.”

From state-run People’s Daily: “Whole-process people’s democracy includes democratic elections, consultations, decision-making, management, and oversight. It integrates with the will of the state.”

Of course, the will of the state is manifested by the arbitrary authoritarian rules and diktats of the Chinese Communist Party (CCP). It is certainly not based on inputs from average Chinese citizens. This is how to interpret Xi’s remarks properly: we will be happy to accept public input, but the CCP will decide what is best for China.

Xi’s “whole-process people’s democracy” has resulted in the complete corruption of CCP-approved political parties in China, complete control of the candidate selection process for “elected” positions at all levels of government, and intimidation, coercion, and psychological conditioning of Chinese citizens to conform and defer to CCP decision-making in all circumstances.

This is certainly not democracy as understood by the rest of the world, and the notion that public opinion is important in the CCP’s deliberations is absurd.

In communist China, what citizen would risk persecution by the state by submitting a real suggestion for change that runs counter to the CCP?

Perhaps Xi is merely soliciting inputs from the 95 million CCP members who can be expected to toe the line. Or perhaps he is being even more clever.

That article also mentioned that “many suggestions from the general public sought via the internet platform have been taken into the Government Work Report delivered at the annual session of the National People’s Congress.”

Since no specific examples were given, perhaps in the interests of conveying a façade of democracy, Xi may actually be using CCP members to submit opinions online to make it seem like communist China is a participatory democracy in the Western sense—but with “Chinese characteristics.”

On June 26, as reported by state-run Xinhua, Xi called for “high-quality partnerships for a new era of global development” during a virtual meeting of something called the “High-level Dialogue on Global Development.”

For the last several years, Xi has been pushing the United Nation’s grand plan, called “Transforming Our World: The 2030 Agenda for Sustainable Development,” including during this recent virtual meeting. Beijing is attempting to reorient the U.N. and its various agencies under Chinese leadership while at the same time displacing the United States as the world’s only superpower. Pushing the U.N.’s plan helps achieve those ends.

“Sustainable development” is a euphemism that embraces the integration of four dimensions: society, environment, culture, and economy. The environment dimension is key for Xi, as China has become the world’s largest supplier of solar panels and other so-called “green technology.” “Sustainable” ultimately means money to the Chinese regime. The rest is gobbledygook and expediency toward the CCP’s long-term goals of world dominance and leadership.

Xi’s “high-quality partnership” is more correctly centered on the spiderweb arrangement of his Belt and Road Initiative (BRI, also called “One Belt, One Road”), in which the web ensnares other countries in debt traps for the benefit of China (the spider at the center of the web). In short, those partnerships that Xi mentions are implemented in Chinese terms, not as real partnerships as the term is generally understood by most people.

Part of the vision statement for that plan includes this sentence: “We envisage a world of universal respect for human rights and human dignity, the rule of law, justice, equality and non-discrimination; of respect for race, ethnicity and cultural diversity; and of equal opportunity permitting the full realization of human potential and contributing to shared prosperity.”

During the virtual meeting, Xi stated, “Only when people all over the world live better lives can prosperity be sustained, security safeguarded, and human rights solidly grounded.”

Uyghurs, Tibetans, Falun Gong adherents, Christians, and other minority and religious groups who have long been persecuted in China fully understand that the CCP does not uphold human rights. Human rights with Chinese characteristics as defined by Xi really means CCP torture and reeducation camps.

During that virtual meeting, Xi claimed that his goal was to help “build an open world economy, and shape a global governance system and institutional environment that are more just and equitable.”

Are we to believe that the leader of mercantilist China—which has a tightly controlled and highly regulated economy, as well as a totalitarian government that is accelerating the use of social controls to surveil and enforce CCP-approved behavior by all Chinese citizens—is somehow interested in a global governance system that is “more just and equitable” than existing international organizations? Please.

On June 20, state-run China Daily quoted Xi’s remarks on fighting corruption made to a group study session of the Political Bureau of the CCP’s Central Committee. Xi stated that “more work must be done to reduce chances for officials to engage in corruption, including steps to focus on departments that are responsible for policymaking, approval, supervision and law enforcement.”

Anti-corruption campaigns have been a hallmark of the CCP since Xi took power in 2012. They have a triple benefit for Xi: anti-corruption measures are a convenient excuse to purge factional rivals; they are popular with the general public, who witness corruption among CCP bureaucrats virtually every day; and they are used to distract the general public from the bad results of CCP policies.

Ten years after he announced his first “war on corruption,” Xi raised the issue again at a politburo meeting in June 2022. According to China Daily, “anti-graft bodies nationwide investigated over 4 million cases [of corruption] between November 2012 and October 2021, in which 4.37 million officials, including 484 senior officials, were held accountable for their wrongdoing.”

If Xi is claiming that corruption is still a major problem after ten years of anti-corruption campaigns, then either the Central Commission for Discipline Inspection—the main government entity involved in the anti-corruption efforts—is itself corrupt or at the very least inept, or perhaps one or more of the above three reasons is really what is behind Xi’s latest public utterances about “corruption.”

Nothing that Xi states publicly should be taken at face value. To determine his real meaning, one must decipher each Marxist euphemism and phrase carefully. Three recent public utterances are cases in point: soliciting public opinions, calling for high-quality partnerships, and fighting corruption.

Xi’s definitions divert greatly from how non-communists, in particular, would define those phrases. Each is best described by adding this phrase afterward: “with communist Chinese characteristics.”