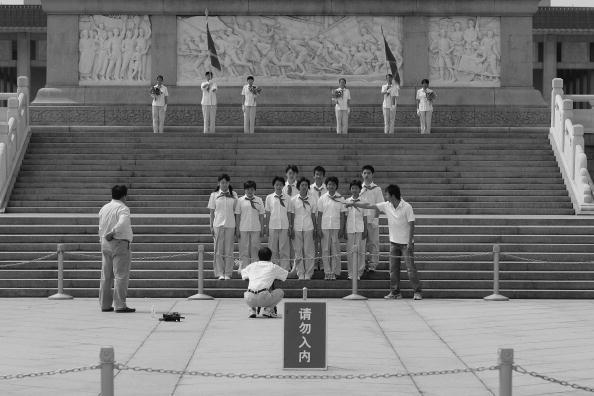 Members of the Chinese Communist Youth league stand at the Monument to the People's Heroes at Tiananmen Square in Beijing on June 4, 2007. (Guang Niu/Getty Images)
Chinese Regime

The Communist Youth League, a key Party fixture that has long been considered a stepping stone for budding Communist officials, has recently seen its political footing get weakened further.

The organization is for young people aged 14 to 28 to learn about Party ideology.

On Nov. 20, Chinese Communist Party (CCP) leader Xi Jinping announced at a Party reform meeting that the China Youth University of Political Studies, a school founded in 1948 and co-managed by the Youth League and China’s Ministry of Education, would abandon its education system, revise its teaching methods, and enhance its political training, according to a report by the Chinese regime’s mouthpiece Xinhua.

The announcement has since been interpreted by Chinese media to mean the Youth League has just been clipped further of its political power. The latest reform announcement came on the heels of Xi’s sharp criticism of the organization, outlined in his new book published in September, “Discussion Excerpts on Work by the Youth League by Xi Jinping.”

In the book, Xi called the Youth League an “empty shell” of an organization that shouted “empty slogans.” And the Chinese leader even warned Youth Leaguers: “don’t think about getting a promotion all the time, and don’t fantasize about becoming the successor [to the Party leadership],” according to a pro-Xi overseas Chinese news outlet DW News.

The Youth League’s setback was further exacerbated when Xinhua announced that China CYTS Tours, a tour company established under China Youth Travel Group, which is 100-percent owned by the Youth League and considered its cash cow, was suspended pending further notice about its ownership change.

Chinese media speculated that China Youth Travel Group would lose its grip on CYTS Tours when news broke that the company’s share trading was suspended, back on Nov. 20. According to Xinhua, the Travel Group currently owns just 17.17 percent shares of China CYTS Tours.

The double blows to the Youth League was not a total surprise. In August 2016, Xi had announced measures to reform the Youth League. All in all, it appeared that a broader Party restructuring was underway.

The Youth League has produced a slew of well-known leaders in the regime, hence political observers refer to the existence of a “tuanpai,” or Youth League Faction in the Party. Former top officials Hu Yaobang, Zhao Ziyang, Hu Jintao, and current premier Li Keqiang were all former Youth Leaguers. Most of them are associated with the tuanpai faction.

But according to Li Datong, the former editor at China Youth Daily, the official newspaper for the Youth League, tuanpai is no more than a “political zombie.” As a result, a successful reorganization of the Youth League could empower Xi to carry out an overhaul of the Party and encounter less resistance from rival political factions.

There were signs that Party cadres with ties to the Youth League would not be favorable under Xi’s new leadership lineup, introduced in October after the 19th National Congress. Qin Yizhi, the former first secretary of the Youth League, was demoted to a position as the deputy director of the General Administration of Quality Supervision, Inspection, and Quarantine. Yang Yue, the former secretariat of the Youth League from 2001 to 2005, and the current deputy provincial governor of Jiangsu Province, was not named to the 19th Central Committee of the Communist Party—a body of 200-plus elite Party officials—even though he was an alternate member for the 18th Central Committee.