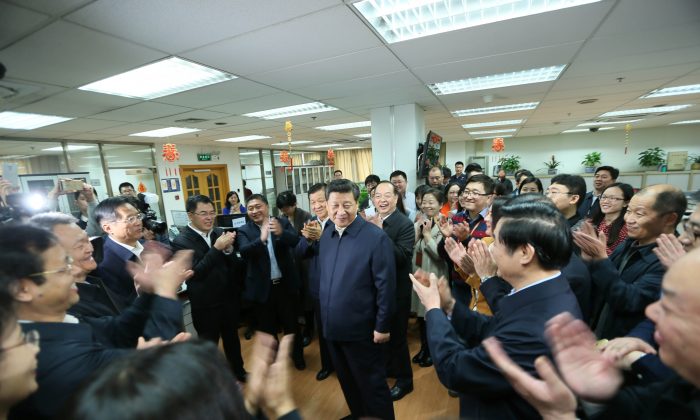 Chinese leader Xi Jinping (C) talks with editors in the general newsroom of the People's Daily in Beijing on Feb. 19, 2016. (Lan Hongguang/Xinhua via AP)
China

In the main studio of flagship broadcaster China Central Television, Chinese leader Xi Jinping tried a little newsreading. A beaming news anchor stands to the right of the Party leader in a picture circulated on the Chinese Internet. To his left looms propaganda chief Liu Yunshan, his expression dour.

On Feb. 19, Xi toured the People’s Daily, Xinhua News Agency, and CCTV, the three biggest Party news media outlets, in a highly publicized outing. He later called on these media organizations to “strictly follow the Party’s leadership,” according to a report by Xinhua, the official broadcaster.

“All news media run by the Party are part of the Party family,” Xi said.

“The Party regulates the media. The Party-ruled and State-owned media must follow the Party line. This is determined by the country’s basic political system. This principle is the lifeline of the Chinese press,” droned the Global Times, the Chinese regime’s nationalistic rag, in the opening paragraph of a Feb. 22 editorial.

Xi’s news media tour has been commonly understood to be yet another effort at posturing by a Party hegemon. By insisting that Chinese state media—long considered an important Party tool for ideological control and indoctrination—swear complete allegiance to the Party leadership, Xi is more than ever asserting his supremacy within the Party, critics argue.

Given the deeply factional nature of Party politics, however, a more nuanced reading of Xi’s latest jaunt helps to illuminate the political theater.

Since taking power in 2012, Xi has been trying to root out the powerful Party faction helmed by former Party leader Jiang Zemin, a move born out of a failed coup by two of Jiang’s top lieutenants, former Chongqing boss Bo Xilai and former security czar Zhou Yongkang. Three years later, Jiang’s massive influence has been significantly eroded by the anti-corruption campaign and the military reform, two Party rectification measures enacted by Xi. But the factional fighting remains a bitter “life-and-death struggle,” according to political analysts.

Presently, Xi Jinping appears to have the upperhand. State media recently carried the remarks of several top Party cadres who call Xi China’s new “core” leader—a historically significant term that pre-eminent Party leaders like Mao Zedong, Deng Xiaoping, and Jiang Zemin (but not Hu Jintao) have reserved for themselves to indicate their complete sway over matters of the day.

The US Presidential Primaries in the Eyes of Chinese Media

While the leadership axis is noticeably shifting from Jiang to Xi, the transition is evidently still incomplete. Xi is in the middle of a major military reform; he has not publicly demanded the Party acknowledge him as “core” leader; and, despite threatening noises made in state media last year, Jiang and his right-hand man and former Chinese Vice President Zeng Qinghong have not been formally targeted by the Party’s internal discipline officials, and may still be exerting behind-the-scenes influence and obstruction.

Of course, Xi Jinping’s latest effort to tout his mounting predominance in the Party with the tour of state media could be an attempt at bravado to mask deep-seated insecurities about the stability of the Party’s rule. In 2015, the Chinese economy spurted to its slowest growth in 25 years, and the Shanghai stock exchange crashed spectacularly in June, July, and August.

Still, Xi can at least claim a small but surely satisfying victory: By having Liu Yunshan, the propaganda chief and known Jiang loyalist, tag along on his tour of the three major Party mouthpieces and observe their pledges of loyalty to the Party chief, Xi is very publicly putting Liu in his place.