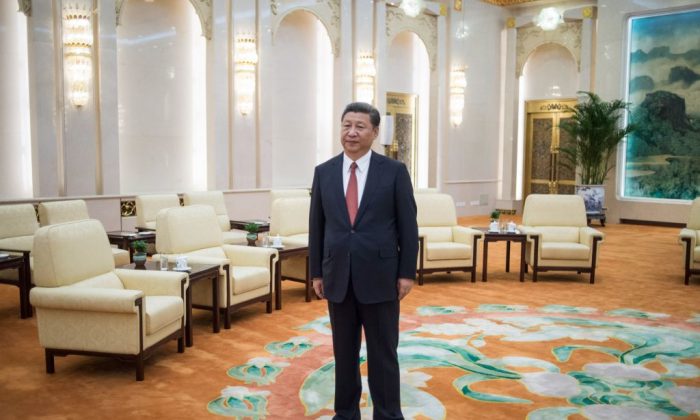 In recent weeks, many senior officials in the Chinese regime’s security apparatus have been reshuffled or suddenly dismissed from their posts. Most significantly, all provincial security leaders who took office with Chinese leader Xi Jinping in 2012 have now been replaced.

To those more familiar with the conventional view on Xi and the operations of the Communist Party, Xi’s motivation for making the personnel changes might seem imponderable. Why fix a security apparatus that appears to be doing a good job in suppressing the populace?

Analysts of elite Chinese politics, however, see a noteworthy development. They argue that Xi is finally making progress toward fixing a bureaucracy that does not listen to him. They also note that the changes will not result in a liberal, rule-of-law judicial system, given the nature of the Chinese regime.

Developments in Chinese politics are notoriously hard to read, owing to the opaque operations of the Chinese leadership. Reading the Xi era is tougher, given several instances when what Xi said and how the Chinese bureaucracy responded were at odds.

A recent and high-profile example is the so-called “Lei Yang incident.”

In May 2016, five Beijing police officers wrongly arrested young Chinese environmentalist Lei Yang. The police beat him, and he later died in custody.

The Lei Yang incident sparked a huge public outcry. Xi openly called for a “fair and just” handling of the case.

Following the conclusion of investigations, however, a Beijing procuratorate found the five police officers not guilty.

A cynical reading of the procuratorate’s failure to press charges on the police would be that Xi, who is considered by some to be the most powerful Chinese leader in decades, had been insincere with his words. Yet this reading becomes problematic if one considers that Xi may be far less powerful than presumed, and may not even be fully in charge of the Party.

Xi has long been working to wrest control over the Chinese regime from the political faction of former Party boss Jiang Zemin. Jiang’s faction was able to sink deep roots inside the regime’s bureaucracy—particularly in domestic security, the military, and the propaganda department—over the two decades before Xi took office.

Given the Jiang faction’s influence over the “deep state” and the Party’s natural inclination toward repression, Xi runs into huge resistance whenever he tries to reform key Party and state organs, particularly the security apparatus.

Cleaning Up the Security Apparatus

On June 2, an official website in Jilin, a province in northeast China, announced that Jiang Zhiying was replacing Jin Zhenji as provincial head of the Political and Legal Affairs Commission (PLAC). The PLAC is powerful Party organ that oversees the regime’s security enforcement authorities, including the courts, the police, and the armed police, as well as prisons and detention centers.

The changing of security leadership in Jilin meant that all the PLAC chiefs from China’s 31 provinces and regions who took office with Xi Jinping in 2012 have been replaced. Eleven replacements were carried out in the first half of this year alone.

On June 9, Chen Zhimin, a vice minister in the Chinese regime’s Ministry of Public Security, was “removed from office.” Days later, He Ting, the public security chief of Chongqing, a provincial-level city, was suddenly dismissed.

On June 15, Caixin, a respected Chinese financial magazine, reported that 14 senior People’s Armed Police from a dozen provinces and regions were replaced over a six-day period in June.

There have also been several changes in the top leadership level of the police and armed police since 2012.

Analysts say that Xi Jinping is trying to regain control over the security apparatus with the recent personnel changes.

“The PLAC needs to undergo a substantial cleansing because it has long been helmed by Luo Gan and Zhou Yongkang, two key members of Jiang Zemin’s faction,” said Shi Cangshan, an independent analyst of Communist Party affairs based in Washington.

Shi continued: “Under Zhou and various provincial PLAC Party secretaries, the PLAC was very unrestrained in handling its affairs. There were many miscarriages of justice and suppression of activists and regular citizens. Zhou and the others were also very corrupt, and they tried to influence elite Chinese politics.”

When Zhou Yongkang was security czar from 2008 to 2012, the PLAC received a budget higher than that of the military. It routinely suppressed dissidents, ethnic minorities, and practitioners of the spiritual discipline Falun Gong.

Zhou and Bo Xilai, a disgraced Politburo member and Party boss of Chongqing, are among a handful of purged officials whom Xi has accused of planning a coup—a plot that was leaked by insider sources. In 2015, Zhou was found guilty of abusing his position and taking tens of millions in bribes, and sentenced to life in prison.

Shi says that Xi must rectify the security apparatus because it is the root cause of many societal problems in China today.

But Xi’s recently sweeping personnel changes are “merely the first step” in what will be a complicated and drawn out process, Shi said.

“Reforming the security apparatus is unlike reforming the military, which is a relatively closed system where personnel changes have minimal impact on society,” said Shi.

“The Chinese communist regime is an authoritarian system that relies on heavy-handed suppression to safeguard its political power,” Tse said. “The regime will run into trouble if rectification of the security apparatus is too vigorous, especially given how tensions between officials and the people have reached a tipping point as a result of problems accumulated from Jiang Zemin’s era.”

Tse says that Xi’s troubles with the security apparatus are further complicated by the available personnel and the Communist Party’s repressive tendencies.

Many security officials are loyal to Zhou Yongkang and the Jiang faction, forcing Xi to break with the norm of promoting provincial police chiefs to head the provincial PLACs. Instead, he has been choosing officials from outside the legal and security apparatus.

Tse explains: “Many local officials are disobeying Xi Jinping and have escalated tensions with the people. When things come to a head, the Chinese regime will resort to suppression, because it will never admit to making mistakes. Since it’s tough for PLAC chiefs with no law enforcement background to control recalcitrant police forces, it would seem more ideal to select police chiefs for the top provincial security jobs.”

“And ultimately, Xi will be blamed when problems happen.”

Currently, about 70 percent of provincial PLAC chiefs are linked with or are members of Jiang’s faction, according to Tse’s estimates.

Tse anticipates that prior to the 19th National Congress, a key Party meeting that will be held near the end of the year, Xi will replace the top two officials in the Ministry of Public Security, Guo Shengkun and Fu Zhenghua. Both are known members of Jiang’s faction.