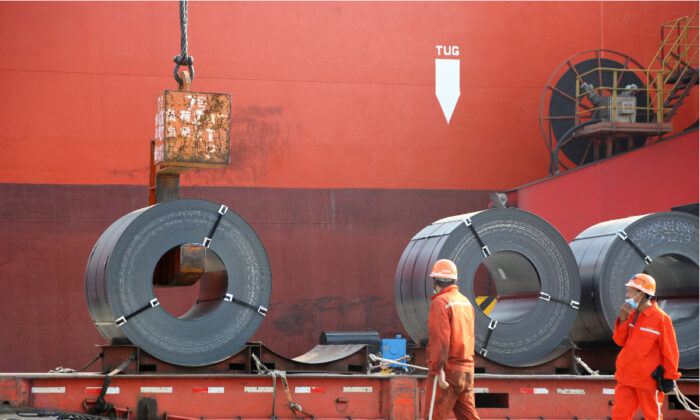 Workers load steel products for export to a cargo ship at a port in Lianyungang, Jiangsu Province, China, on May 27, 2020. (China Daily via Reuters)
Thinking About China

While the U.S. Federal Reserve and other central banks in the developed world are preparing to curb high inflation by winding down pandemic stimulus and raising interest rates, Chinese leader Xi Jinping is attempting to stimulate China’s economy, as he fears public unrest.

“Once economic and financial risks are mishandled, they can easily be transmitted into the social and political sphere,” a recent statement by the Central Political and Legal Affairs Commission of the Chinese Communist Party (CCP) reads.

Beijing claims that China’s gross domestic product (GDP) rose by 8.1 percent in 2021, but that it’s implementing expansionary monetary policy because growth in the final quarter of 2020 was only 4 percent, well below the 5 percent level the CCP considers acceptable. Many experts believe that Xi commanded interest rates to be cut in order to mend the economy and avoid social discord.

In 2021, Xi implemented a number of policies that had a negative effect on the economy. Regulations intended to decrease pollution by restricting the use of coal caused manufacturing slowdowns, while attempts to manage the price of electricity resulted in energy shortages. For-profit tutoring services were effectively outlawed, wiping out hundreds of billions of dollars from the economy. At the same time, the CCP launched “anti-monopolistic” regulations to rein in “the disorderly expansion of capital.” These directives largely affected the tech and real estate sectors, both of which are still suffering.

The CCP imposed curbs on overseas IPOs, and the cyberspace administration announced new rules requiring tech firms to seek approval for investment deals. Consequently, China’s tech sector stocks are down again. Real estate shares similarly took a nosedive in 2021 because Xi cut off the taps to easy credit. As the country moves into 2022, a depressed property sector is dragging down the rest of the economy.

In order to rejuvenate the real estate sector and hopefully revive the economy, the CCP is easing its monetary policy, lowering benchmark lending rates. The central bank is decreasing the one-year loan prime rate and one-year medium-term lending rate. It’s also cutting the five-year loan prime rate, which includes mortgages. However, in spite of cutting rates, Beijing is keeping the “zero-COVID” policy, which is causing sporadic lockdowns, restrictions, and disruptions.

Anyang, China, a city of more than 5 million people, came under lockdown in mid-January. At various times, lockdowns have been imposed in some of China’s largest cities, such as Tianjin, Xi’an, and Shenzhen. Ongoing travel restrictions are preventing the tourism sector from recovering. Constraints remain on trucks and warehouses, while mass testing and quarantines are reducing the supply of workers. Factories continue to see closures, and ports are facing bottlenecks. The costs of these measures are astronomical. A one-week delay at the port of Ningbo, China, for example, could affect roughly $4 billion worth of trade.

Numerous large companies, such as Toyota, Volkswagen, and Samsung, have reported suffering under COVID restrictions. Quarantine measures disrupted Shenzhou International Group, a textiles company that supplies Nike, Adidas, and Uniqlo. U.S.-based company Micron Technology Inc. reported that lockdowns in Xi’an have reduced the number of workers on-site, which has affected the output of its DRAM memory chips.

The Central Political and Legal Affairs Commission cautioned that “with the economic downturn, some deep-seated problems may surface.” CCP officials have warned that unemployment among young people could cause dissent. The jobless rate for those aged 15 to 24 increased to 14.6 percent in October 2021. Likewise, the number of migrant laborers, who work in construction and manufacturing, has decreased by 4 million since the pandemic began.

Tech sector job losses are thought to be at more than 1 million, while jobs erased in the education sector are estimated to be roughly 3 million. The tourism sector is believed to have lost 16 million jobs. Unemployment in the real estate sector is harder to quantify because it affects everything from construction and raw material sales to professional services. By some estimates, 14 percent of all jobs in urban areas are related to real estate. Consequently, a crash of the real estate sector could wipe out tens of millions of jobs.

In a meeting chaired by Xi in December 2021, the Politburo identified economic stability as the top priority for 2022. China’s Central Economic Work Conference report states that “economic work next year must have ‘stability’ as its watchword.”

The Central Political and Legal Affairs Commission stated, “If economic and financial risks are not handled properly, they can be easily transmitted to social and political realms.”

In an address at the Davos economic forum on Jan. 17, Xi told world leaders that supply chain disruptions and rising gas prices could cause instability. He cited the example of Kazakhstan, where violence recently broke out because of general inflation and increased gas prices. Lowering interest rates is the CCP’s attempt to fuel the economy and avoid negative fallout from two years of disastrous lawmaking. He urged other countries, particularly the United States, not to raise interest rates.

Changes in lending interest rates may help stimulate China’s housing market somewhat, but other sectors are unlikely to recover. As restrictions on the tech sector intensify, the jobs won’t come back. Similarly, unless prohibitions are removed from the tutoring sector, those jobs are gone forever.

The “zero-COVID” policy will continue to decimate the tourism sector, removing any hope of recovery there. Investor and consumer confidence may not be sufficiently restored to invigorate the economy. This is particularly true of those investors and consumers who have lost their jobs or their fortunes due to Xi’s policies.