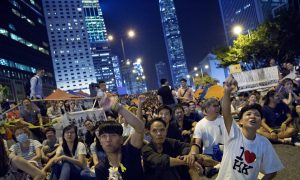 With the magic of Photoshop, China's leader takes to the streets of Hong Kong with protesters
By Larry Ong
biggersmaller
Print

Occupy Central has brought out the creative best of Hong Kong’s netizens.

In the photo, Xi is dressed in a simple white collar shirt, has rolled up black trousers to keep them from getting wet, carries his own navy blue umbrella, and appears to be in consultation with a worker.

There doesn’t seem to be anything special about Chinese “Pulitzer Prize” winning photo in either subject matter or technique, but that’s precisely why it won, according to Adam Taylor from the Washington Post and Matt Schiavenza from the Atlantic.

Both authors opine that the photo succeeds in portraying Xi as a down-to-earth, “average Joe” who can relate with the people, unlike the wealth-displaying, “princely” politicians — like the subject matter of the second place photo, former Chongqing boss Bo Xilai — that have been arrested as part of Xi’s anti-corruption campaign.

MORE: CY Leung is Too Cute to Hate

Hong Kong netizens probably couldn’t care less about Xi’s image management in China, but they didn’t pass up on the chance to re-appropriate a photo of the top China Communist Party (CCP) leader carrying the wet-weather implement that has become the symbol of their pro-democracy movement.

Check out the highlights of Xi Jinping “supporting” the Occupy Central civil disobedience movement with his “yellow” umbrella below.