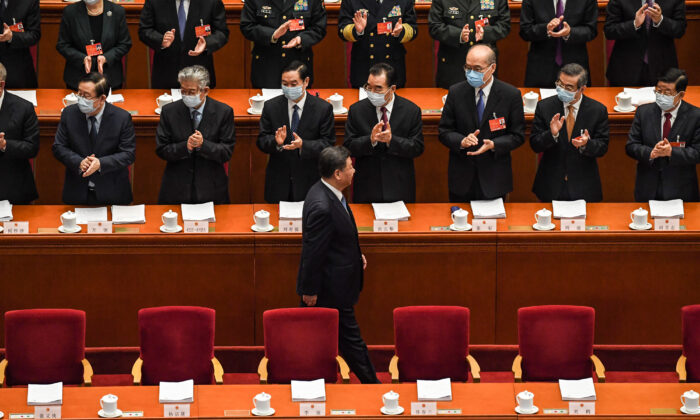 At the latest Chinese Communist Party rubber-stamp legislature, regime leader Xi Jinping told the military to step up the use of law in military engagement with foreign countries.

“Improve the use of law in foreign-related military affairs,” Xi told representatives from the Chinese military and armed police forces at the annual conference in Beijing.

“Make an overall plan [in foreign countries] that combines military operations and fighting by using the law,” Xi, who is also Chinese military’s Commander-in-Chief, added. “Complete the laws and regulations governing military engagement with foreign countries.”

This is the new order following the Chinese regime’s announcement of the proposed 2022 defense budget on March 5, which saw the biggest increase in defense spending to date.

“China’s defense budget in this year [2022] is 1.45 trillion yuan ($229.4 billion), which is 7.1 percent higher than the budget in 2021,” Chinese state-run media quoted China’s Ministry of Finance, who reported the data after reviewing it at the 2022 government rubber stamp legislature’s conference on March 5.

In fact, China’s defense budget has increased continually starting 34 years ago, when the Chinese regime first announced its defense budget in 1988. The pace of increase is always faster than the country’s gross domestic product (GDP) growth rate.

Su Tzu-yun, Director of the Institute for National Defense and Security Research in Taiwan, estimated that China’s defense budget has increased 206 percent since 2012 the year Xi took office as Chinese leader.

“Military expenditure may be funded from a number of extra-budgetary or off-budget sources … This is the case in China, the world’s second-largest military spender,” SIPRI wrote in 2017.

At the March 7 meeting, Xi asked the military and armed police forces to make preparations for war.

Li explained that the military focus in 2022 should be modernizing the weapons and equipment, strengthening  technical innovations, and training the experts for the new era.

The instructions came amid increasing aggression by the Chinese regime towards self-ruled island Taiwan, as well as heightened military activity in the disputed South China Sea.