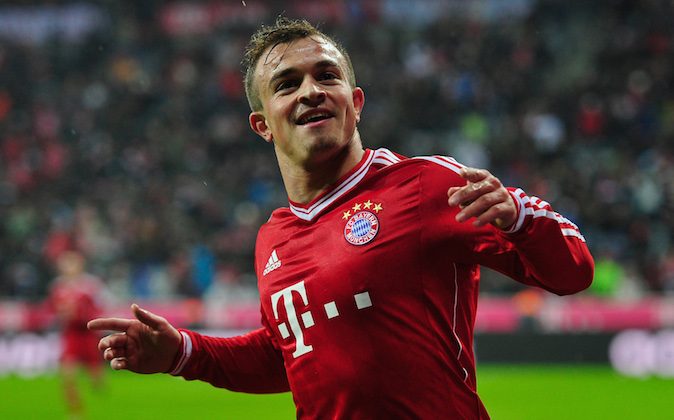 According to the Mirror, Liverpool are starting preliminary talks with the 2013/2014 Bundesliga champions for the 22-year-old Swiss.

Shaqiri is finding it difficult to break into the Bayern Munich first team, and has been seeking a move for some time to get more playing opportunities.

The highly-rated forward has scored 15 goals in 65 appearances for Bayern.

Check out an Associated Press article on Switzerland’s World Cup 2014 clash with France.

Switzerland to Defend Against France

Whoever wins in Salvador on Friday will take a major step toward clinching top spot in Group E, and probably avoid Lionel Messi’s Argentina in the second round.

“It’s a derby,” Hitzfeld said. “We have to be firm in the defense and react quickly on counter strikes.”

Switzerland began its World Cup campaign with a 2-1 win against Ecuador after a late goal by Haris Seferovic. The French easily beat Honduras 3-0 after it was reduced to 10 men before halftime

“If we want to stand a chance against France, we will have to play beyond our limits,” the veteran German coach said. “In the first match, we were a bit nervous. “We have to be calmer and more composed.”

Under Hitzfeld, Switzerland has been transformed into a very efficient team, losing just once in 18 matches over the past two years and reaching No. 6 in the FIFA rankings.

“The FIFA ranking does not really matter, except to say that we are a really good team,” Swiss defender Steve von Bergen said.

Hitzfeld, who has announced his retirement after the World Cup, said France is the favorite, pointing out the results in recent friendlies.

“We won 1-0 against Jamaica, they won 8-0,” he said. “All French stars are primarily team players, and that is what makes them dangerous.”

It promises to be an intriguing battle in midfield, with Napoli pair Valon Behrami and Goekhan Inler, along with Bayern Munich’s Xherdan Shaqiri, going up against France’s Paul Pogba, Blaise Matuidi and Yohan Cabaye.

Inler said Switzerland’s defense will have to take care not only of Karim Benzema, who scored twice in Sunday’s win against Honduras, but the whole French strike force.

“There is no anti-Benzema tactics,” Inler said. “He is a very good attacker, but he is just one of many good French players.”