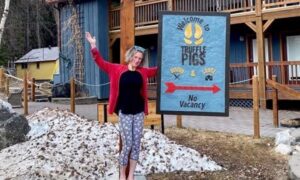 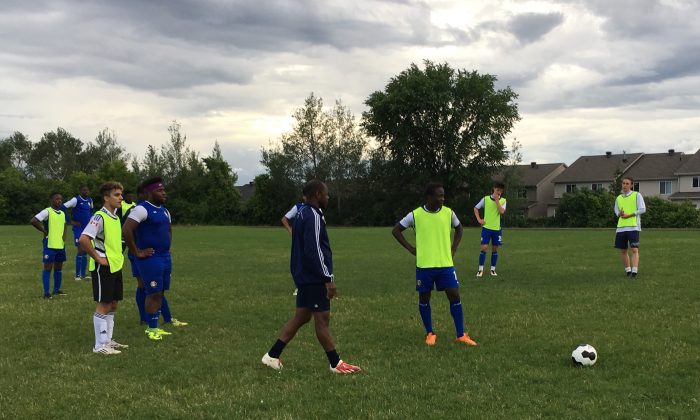 X-Uvia coach Richard Morris (dark top) stops play and explains what a striker should be looking to do during a practice game at Samuel Genest High School in Ottawa on June 27, 2017. (Rahul Vaidyanath/The Epoch Times)
Canada

The name “X-Uvia” comes from the word “exuviate,” which means to shed your skin and thus renew yourself.

“As a player, when they come to us, they’re going to be new, different, more talented, more focused, and better players,” says Richard Morris, owner and founder of X-Uvia Soccer Academy (XSA).

X-Uvia is a new kid on the block as far as youth soccer development programs go in Ontario, Canada. Based in Ottawa, it’s been around for five years, but is now showing signs of growth and ambition.

“We give these kids hope, an opportunity to play at another level,” Morris says. “That’s what sets us apart.”

It’s not just about having parents pay money to get their kids some exercise or learning the sport. Morris believes most kids don’t get the type of coaching he can provide given his experience.

If they want to play at a certain level, it comes at a price.
— Richard Morris, X-Uvia owner and founder

He doesn’t put much emphasis on coaching designations for the purpose of developing players into pros. “I’m passing on my personal experiences to these players and nothing beat experience as a teacher,” Morris says.

For young players that have the talent and desire to play professionally, it’s important to get noticed by scouts and agents from clubs that will provide more opportunities.

X-Uvia works with a couple of agents overseas—Giulio D’Alessandro, talent scout based in Italy and Huffman Eja Tabe in Sweden—and has a European affiliate in FS Metta, a soccer club based in Riga, Latvia.

In a way, Latvia is like Canada in international soccer. It is a country not known for its soccer and is trying to change those perceptions.

“So now, the best players of X-Uvia will have the possibility to start a professional career in a well organized and favourable (for use of young players, for climate similarity with Canada, for possibility to play without big pressure) club in Europe,” says D’Alessandro via email.

D’Alessandro’s role is to guide the X-Uvia academy in Europe and help players turn pro. He visited the academy in Ottawa in March and feels the best players Morris develops have an opportunity in Europe.

One player X-Uvia has developed, Benson Fazil, is on his way to FS Metta for a trial in July. Other X-Uvia graduates Thomas Licursi and Joshua Jasek have also experienced some European success. Licursi joined Swedish second division club FK Jurnieks in May, and Jasek was selected to play in the Lazio Cup in Italy as part of an under-17 squad.

“Our dream is to make nice viewings in other countries so we can get exposed to a lot of countries,” says Zendai Joseph, a 15-year-old in his first year with X-Uvia.

Joseph is one of the youngest players in X-Uvia’s under-20 squad. The striker/winger was spotted by in Sweden by Huffman who connected him with X-Uvia. Joseph also plays for a Paris St-Germain feeder club based in Montreal and will be playing in a tournament in Germany for 10 days in August.

Another kid with big dreams is Joshi Kanane, 18, who came to Canada from Congo. “If I work hard, I’m going to be a professional. That’s my top goal,” Kanane says. His idol is Italian legend Gianluigi Buffon.

Kanane has been with X-Uvia for nearly six months and says the academy has a different approach to the game than what he was used to. “I love the way the coach teaches,” he says.

The X-Uvia under-20 team practices three to four times a week and plays games every weekend in Toronto in the CAF (Canadian Academy of Futbol) league. Morris says the competition is better against the Toronto-based teams.

“It is quite demanding, but if they want to play at a certain level, it comes at a price,” Morris says.

As X-Uvia is all about developing players and not just getting a workout or participating in a team sport, competition is imperative to a player’s success, says Morris.

“The kids will improve faster; the competition has a lot to do with the evolution, growth as a player,” Morris says.

Sam Ogunremi, 17, has a soccer scholarship waiting for him at Nipissing University in North Bay next year. He’s a 6-foot-3-inch striker who joined X-Uvia in January.

“I just want to see where I can take it,” Ogunremi says about his game. He also has the attention of X-Uvia’s European contacts and also has an eye on the newly established Canadian Premier League (CPL).

“Don’t know much about it,” Ogunremi says about the CPL. “It would be on my list for sure.”

The new CPL will offer a greater chance for young Canadians to develop into professional soccer players.

“It’s warranted, it’s far over due,” Morris says about Canada getting its own domestic pro league. “It will give the international market an opportunity to see more [Canadian] players.”

X-Uvia is building youth teams in the under-14 and under-11 age categories. Recruitment is done by word of mouth and social media.

“We’re confident that our soccer is the best development and we’ll be able to impart our knowledge on these kids,” Morris says.

There is plenty of opportunity for X-Uvia with its European connections to provide a chance for Canadian kids to experience playing the beautiful game in a different country.