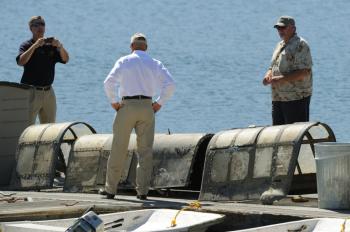 The cockpit canopy of a WWII vintage Navy SB2C Helldiver dive bomber sits on a dock after being retrieved by a salvage crew from the bottom of a Lower Otay Lake near San Diego on August 19, 2010. (Mark Ralson/AFP/Getty Images)
US

WWII Plane Lifted From the Depths of California Reservoir

It took days of work to scoop it free of mud and debris from the floors of Lower Otay Reservoir, where it was first spotted last year by Duane Johnson who was trying to locate bass.

It has been 65 years since this SB2C Helldiver aircraft has been on dry land.

According to the San Diego Union-Tribune, the single-engined plane crashed during a flight training exercise on May 28, 1945. Sgt. Joseph Metz and his pilot Richard Frazar swam to shore and survived the incident. Both are now dead.

"I just wish my dad was here to see this," the former pilot's son E.D. Frazar told the Tribune.

The plane was covered in mud with a mangled propeller but had both wings attached. It officially touched the shore at 3:50 p.m.

There were around 7,200 Helldivers created, which were used to drop bombs with very high degree of accuracy. The first Helldiver took flight on June 30, 1942.

This aircraft will be displayed at the National Naval Aviator Museum in Pensacola, Florida, if it is able to be restored.