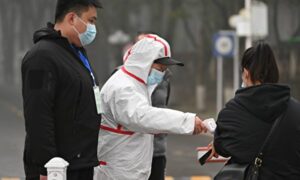 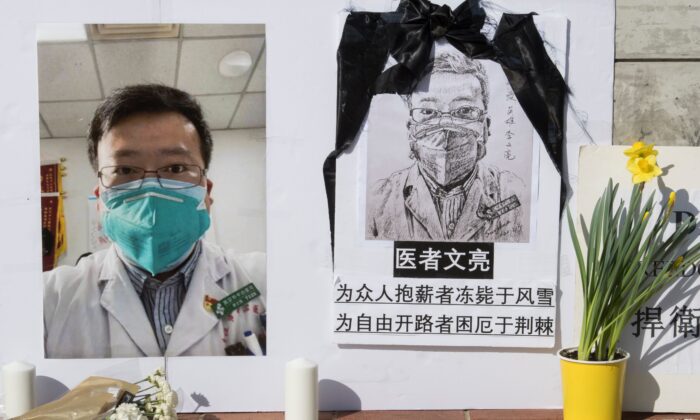 A memorial for Dr. Li Wenliang is pictured outside the UCLA campus in Westwood, Calif., on Feb. 15, 2020. (Mark Ralston/AFP via Getty Images)
China Society

Thousands of Chinese netizens and scores of international rights groups paid tribute to Chinese whistleblower doctor Li Wenliang on Feb. 7, marking the one-year anniversary of his death from the virus that he had sought to warn other doctors about.

Li, an ophthalmologist, was one of eight whistleblowers who warned on Chinese social media in late December 2019 about an “unknown pneumonia” outbreak in the Chinese city of Wuhan. Local authorities didn’t welcome the warning and only confirmed the outbreak after the doctors’ posts went viral.

He was summoned on Jan. 3, 2020, to a police station, where he was reprimanded for “rumor-mongering” and forced to sign a “confession statement.” The document accused him of “disturbing social order” and “breaking the law” for his online activities. It warned that he would be “punished by the law” if he continued such “illegal activities.”

On Feb. 1 last year, Li announced on his Weibo social media account that he had tested positive for COVID-19, the disease caused by the CCP (Chinese Communist Party) virus, which is commonly known as the novel coronavirus. He said he had contracted the virus while unknowingly treating an infected patient at the Wuhan Central Hospital.

That Weibo post turned out to be Li’s last; he died in the early hours of Feb. 7.

Since his death, Chinese netizens have regularly visited the same Weibo post to leave messages, such as to wish Li a happy New Year.

His Weibo post was flooded with thousands of comments over the weekend. On Jan. 7, one netizen from Wuhan wrote: “Last night, my friends and I walked past the [Wuhan] Central Hospital. We all thought about you and our hearts hurt. Time flies and it has already been a year.”

Many netizens decided to leave comments with Li’s own words.

“A healthy society should not have just one type of voice,” a comment made by Li during a January 2020 interview with Chinese media Caixin. Asked what he thought of authorities’ punishment for him, Li had said he didn’t agree with “excessively exercising public power” to interfere in society.

One netizen from southern China’s Guangdong city left this message: “Today I cry. In this current environment for speech, I feel that tragedies like [Li’s] will happen again.”

Days before the anniversary of Li’s death, Ms. Fang, a Wuhan resident who declined to give her full name, said during an interview with Epoch Times’ affiliate NTD that there are still many unanswered questions about the initial outbreak in China,

“Who prevented [Li and others] from telling people what they knew?” Fang said. “As residents of Wuhan, we know nothing. How come we still know nothing after more than a year?”

The Chinese regime eventually investigated Li’s case and punished two police officers in March last year for their “inappropriate” actions in punishing him. Many people expressed dissatisfaction with the investigation, saying the two officers were merely scapegoats.

Fang also questioned why China’s state-run media initially claimed that the virus wasn’t contagious, and yet the media hasn’t been punished for rumor-mongering.

China’s state-run media didn’t acknowledge that the virus could spread among people until Jan. 20, 2020.

Fang added that due to China’s internet censorship, she is unable to share her opinions on social media.

She said that it’s abnormal for any society to have only one narrative, adding, “A government that is not subjected to any supervision means that its officials are emboldened to do anything.”

Many U.S. officials have voiced support for Li.

The Congressional-Executive Commission on China (CECC) honored Li on Feb. 7 on Twitter.

“The Chinese govt should allow Dr. Li to be freely mourned & honor this sad anniversary by being completely transparent about the virus’s origin & spread,” CECC wrote.

In addition, Republican lawmakers in both the Senate and House introduced a bill last year to rename the street outside of the Chinese embassy in Washington as “Li Wenliang Plaza.”

“One year after the death of Chinese doctor Li Wenliang, others who spoke out about the #COVID19 pandemic are still being targeted. China must end the repression of freedom of expression,” Amnesty International wrote on Twitter.