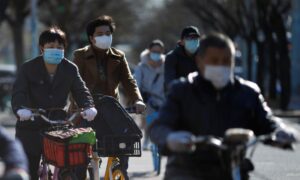 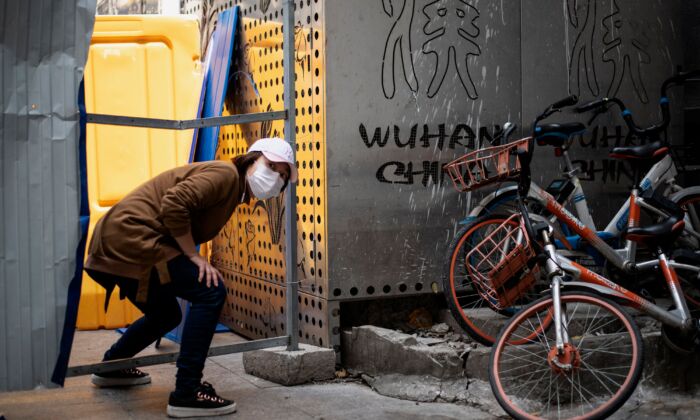 A woman wearing a face mask crosses a barricade in Wuhan China on April 7, 2020. (NOEL CELIS/AFP via Getty Images)
INSIDE CHINA

As Wuhan, ground zero of China’s epidemic lifts all travel restrictions beginning April 8, locals report that many are still infected with the CCP virus, commonly known as novel coronavirus.

More asymptomatic carriers are detected; meanwhile, Wuhan hospitals are discharging COVID-19 patients before they fully recover. Some China analysts worry that a larger outbreak may be unavoidable after quarantine measures are eased, particularly as Wuhan authorities encourage people to go back to work.

Businesses closed on Jan. 23 when the city was placed under lockdown to prevent the CCP (Chinese Communist Party) virus from further spreading.

The Wuhan government issued a notice on March 7, stating that areas with no new infections for the past 14 days are designated “virus-free.”

Those who live in the residential compounds without the “virus-free” title aren’t allowed to step out the door.

State-run media Xinhua quoted the Hubei provincial government on April 6, stating that 70 residential compounds lost their “virus-free” title after authorities detected asymptomatic carriers living there by the end of the day. Also, 87 neighborhoods, two villages, and 11 towns in Wuhan lost their “virus-free” titles. Wuhan is the capital of Hubei province.

On April 5, at least five residential compounds in Wuhan issued notices about people found to be asymptomatic carriers. For example, the Huanong Xiyuan residential compound in Hongshan district found that two residents from different buildings were diagnosed as asymptomatic carriers on April 2 and 4 after they visited the hospital for other ailments.

But interviews with Chinese citizens and internal reports obtained by The Epoch Times revealed that local authorities frequently underreport cases. A dataset from Wuhan health authorities showed that the city tested 16,000 patient samples on March 14, with 373 showing up positive. But authorities only publicly recorded four infections for that day.

A Wuhan netizen whose mother works at a local hospital also shared the current situation in an online video: “[My mother] told me that at present, her hospital receives several new COVID-19 patients a day. But the government does not allow the hospital to report it. … Lots of people loosened their vigilance [about social distancing] because no reported new infections are allowing the virus to spread quicker.”

Some authorities are also cautioning city residents not to take the situation lightly. State-run Yangtze Daily quoted Wuhan traffic police saying on April 7: “Lifting the traffic ban does not mean the outbreak is over. Wuhan people should try their best to stay at home if they don’t need to leave Wuhan nor return to work.”

“The Wuhan model [of locking down a city] … cut off the economy. It hurt the country’s financial system, and thus is a big loss of power,” Tang said. “The Chinese regime is eager to restore its economic system and create the illusion [that things are back to normal].”

But as people return to work, Tang is concerned about the possibility of another outbreak. “With more people traveling around the city and even around the country, the next larger-scale outbreak can’t be avoided.”

Gu Xiangpeng, 69, is a retired teacher and pianist. He developed symptoms of the CCP virus on Jan. 24 and was sent to the Wuhan Tongji Hospital for treatment.

After Gu tested negative in a nucleic acid test, on April 6, he was discharged from the hospital and sent to the Maternal and Child Health Hospital, which had been converted to a quarantine center.

The following day, Gu’s daughter posted on Weibo, a Twitter-like Chinese social media platform, that Gu had a tracheostomy after the virus damaged his trachea. He needs one sputum suction every hour. Part of his brain had dead tissue as a result of insufficient blood to the area. One side of his body can’t move nor feel, and he also couldn’t eat, she wrote.

After Gu was moved to the quarantine center, nurses there said they had no experience treating someone like Gu and couldn’t perform the sputum suction.

The Maternal and Child Health Hospital: “issued a medical crisis notice to my father quickly, maybe because they knew they couldn’t treat my father,” Gu’s daughter wrote. This type of notice is usually for informing the patient’s family members about the possibility of death.

Gu’s daughter tried to send Gu to a hospital, but none were willing to receive him. “The hospital treating COVID-19 patients rejected him because his diagnostic kit test was negative. A non-COVID hospital refused to treat him because he was just released from a COVID hospital,” the daughter said.

RFA cited insiders who said hospitals are now required to discharge their COVID-19 patients to comply with the authorities’ desire to declare that the virus had been successfully contained.