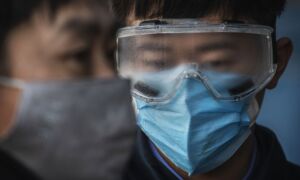 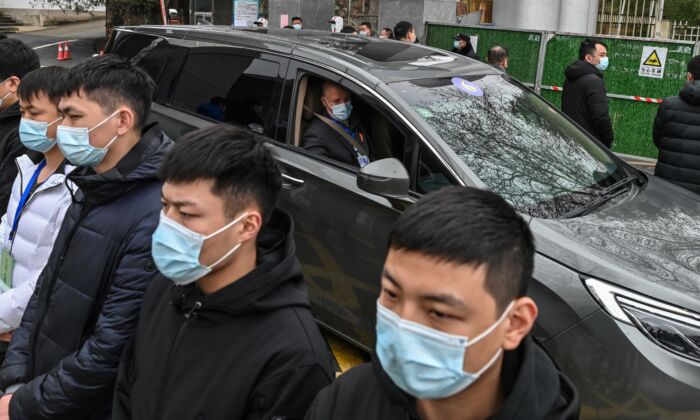 Members of the World Health Organization (WHO) team investigating the origins of the COVID-19, leave the Hubei provincial center for disease control and prevention, as a group of guards bar people from approaching, in Wuhan, China, on Feb. 1, 2021. (HECTOR RETAMAL/AFP via Getty Images)
INSIDE CHINA

As a team of experts from the World Health Organization (WHO) is in Wuhan to investigate the origins of the CCP (Chinese Communist Party) virus, city residents expressed concerns that the team would not be able to conduct a full probe given local authorities’ earlier coverup.

They also lamented that the team visited a museum exhibit that was a propaganda effort to glorify the Chinese regime’s response to the outbreak.

Zhang Hai, whose father died from COVID-19 last year, questioned why foreign journalists were not allowed to cover the WHO team’s itinerary or interview the experts.

“Investigating the origins of the virus is an honorable task. Why do they look so sneaky?” Zhang questioned. “Personally, I don’t think the WHO team can get any fruitful or trustworthy results.”

Before the researchers were set to do fieldwork around Wuhan, Zhang had urged the WHO team to speak with bereaved families like his, who he said were being silenced by local authorities.

“I believe that they must contact real bereaved families to know the truth of the outbreak, the true process of how the virus spread in Wuhan in January last year,” Zhang said. “We have no chance to talk to them… because the authorities don’t allow us.”

He added that authorities have warned him not to post any “sensitive information” on social media.

Another Wuhan resident, surnamed Yu, said: “The WHO team should talk to COVID-19 patients and their families. They should know what Wuhan families experienced, such as how the patients got infected and died.”

Yu expressed doubts that the WHO team would be able to access vital information for the investigation, “because they follow what [Chinese authorities] arrange and only visit and talk to the people who represent the government.”

She lamented that citizen journalists have been sentenced or detained simply because they wanted to investigate the truth of the outbreak.

“Zhang Zhan was sentenced to four years in prison just because she took some photos on the streets and talked to ordinary people in Wuhan,” Yu said.

After being quarantined for 14 days upon landing in Wuhan, the WHO team started their investigations on Jan. 29. That afternoon, they visited the Hubei Integrated Chinese and Western Medicine Hospital.

On the second morning, they visited Wuhan Jinyintan Hospital, one of the hospitals that first treated COVID-19 patients in severe condition. In the afternoon, they were brought to a museum exhibit about how Wuhan “fought against the virus.”

On the third day, the team visited Baishazhou market, one of the city’s largest wet markets, with a large entourage of Chinese officials and government staff. Then, the team visited the Huanan Seafood Wholesale Market, where the Chinese regime initially claimed the virus emerged. It was sealed off and cleaned by authorities several times last year.

A Wuhan resident surnamed Gao said that since the Huanan market and other venues were cleaned thoroughly in the past year, he questioned what the WHO team could really see.

“All valuable things [the investigation] are gone. I wonder what they can do?” Gao said.

On Feb. 1, the WHO team visited the Hubei provincial Center for Disease Control and Prevention and Wuhan CDC.

On Tuesday, the team visited the Hubei Center for Animal Disease Control and Prevention in Wuhan.

On Wednesday, the team visited the Wuhan Institute of Virology, a biosafety level-4 laboratory, and spoke with staff there about their daily work. U.S. officials have posited that the virus may have leaked from the Wuhan virology lab and caused the initial outbreak.

Chinese authorities have forbidden reporters to approach the WHO team during its Wuhan trip and arrange a large pool of staff to surround the team.

So far, the WHO team has revealed little about what they found, aside from a few posts on Twitter with generic information about the trip.

Authorities have named the museum the experts visited on Jan. 30 as a place for “patriotism education.”

State-run newspaper Hubei Daily reported on Oct. 30, 2020: “The exhibit on the fight against COVID-19 is a vivid and deep patriotism education lesson.”

The Daily reported that the exhibit was organized by the propaganda department of the CCP’s Central Committee, the Hubei provincial government, and other government entities. The 26 museum tour guides were chosen from museums across Hubei, and received comprehensive training in advance, according to the report.

A Wuhan resident surnamed Jiang told the Chinese-language Epoch Times that the exhibit serves to promote the CCP’s rule.

“The exhibit is promoting the so-called ‘positive socialist energy,’ which is fooling people to support the Party,” Jiang said.

The CCP virus outbreak continues to be underreported in China. Authorities themselves have often announced conflicting data.

On Feb. 2, the Hubei health commission announced that the province has diagnosed 68,150 patients since December 2019.

However, the China national CDC released an investigation report on Dec. 28, 2020, stating that 4.43 percent of people in Wuhan have COVID-19 antibodies in their bloodstream, which means they were infected with the virus before. Meanwhile, 0.44 percent of residents in other cities of Hubei were found with antibodies.

Hubei has a population of 59 million, and 11 million of them live in Wuhan, according to the latest official data. Then according to the China CDC’s statistics, about 698,500 residents (4.43 percent of 11 million plus 0.44 percent of 48 million) in Hubei have been infected with the virus—which is more than ten times the number of officially-announced cases.