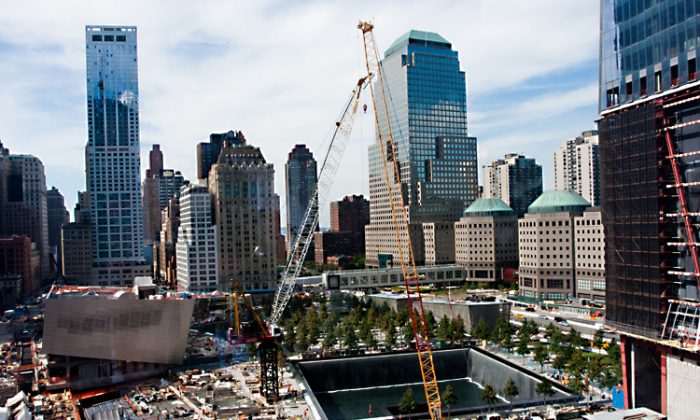 World Trade Center site construction as of August, 2011. Its rising price tag is hard for Port Authority to cover, considering its many transportation projects and limited funding. (Tara MacIsaac/The Epoch Times)
US

NEW YORK—An audit released on Tuesday showed the World Trade Center site construction is $3.8 billion over budget due to a “poorly coordinated capital planning process, insufficient cost controls, and a lack of transparent and effective oversight of the World Trade Center program,” according to Port Authority Executive Pat Foye’s summary on the agency’s website.

After listening to public comments at a Port Authority meeting on Park Avenue on Thursday, Port Authority Vice Chairman Scott Rechler said, “This has been a tough 10 years for the Port Authority, only to be made more challenging with seven different directors over the decade. … You need consistent leadership.”

Rechler is hopeful that the new Port Authority head, Patrick Foye, and other new senior-level staff will stay for a longer run. “When you have new leadership, you have new perspective,” said Rechler.

The new Port Authority board Chairman David Samson promised greater transparency starting with a reform to the Port Authority’s Freedom of Information Act policy. He said the agency needs to do a “better, and frankly smarter job of choosing our priorities.”

One New Yorker at the public session called the project a “dismal mess squatting on hallowed ground.”
Another called it a “500-pound gorilla this board is feeding.”

Another commentator said, “You’ve been doing the best job you probably can. … Our job and opportunity now is how we work together to get this done.”