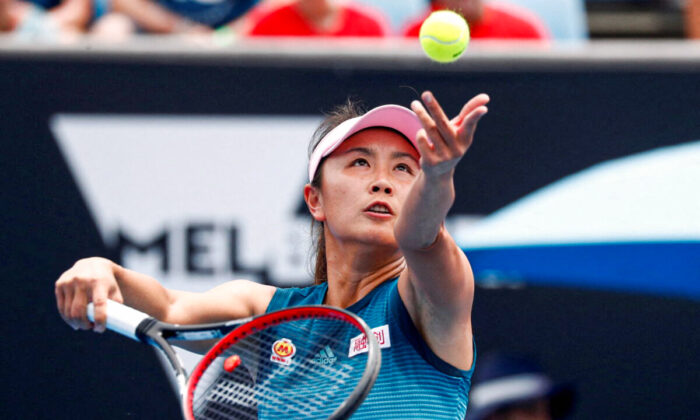 Peng Shuai serves during a first round match at the 2019 Australian Open, in Melbourne Park, Melbourne, Australia. (Edgar Su/Reuters)
China

Peng’s well-being became a matter of concern after she posted a message on social media in November accusing former Chinese Vice-Premier Zhang Gaoli of forcing her into sex. The post was promptly removed and she was absent from public view for nearly three weeks.

In December, the WTA said it would suspend events in China, a decision which could cost the women’s tour hundreds of millions of dollars in broadcasting and sponsorship.

The Hologic deal is the first for the WTA since their previous title sponsorship with cellphone manufacturer Sony Ericsson ended in 2010.

Hologic chairman, president and CEO Steve MacMillan said they were “proud to stand with the WTA in its commitment to the highest integrity and values.”

WTA President Micky Lawler declined to disclose the terms of the deal but said Hologic had joined the WTA family at a “pivotal time.”

“I would consider it more a catalyst to the conversation than the deciding factor,” Lisa Hellmann, a senior vice president at Hologic, was quoted as saying by the New York Times.

“We’ve been watching very closely some of the brave and really high-integrity moves that the WTA has made almost by themselves.

“And that brought to our attention both the potential need they may have for title sponsorship, as well as really wanting to stand with and support the stance they are taking despite really negative impact on their business.”

Peng last month denied she ever accused anyone of sexual assault, adding that she herself had deleted her social media post that had appeared to make such a claim.

But the WTA stuck to its demand for a formal investigation into Peng’s allegations and an opportunity to meet with her privately to discuss her situation.

“For us it’s the most important sponsorship of the WTA’s history and probably the biggest in women’s sports,” said Lawler.