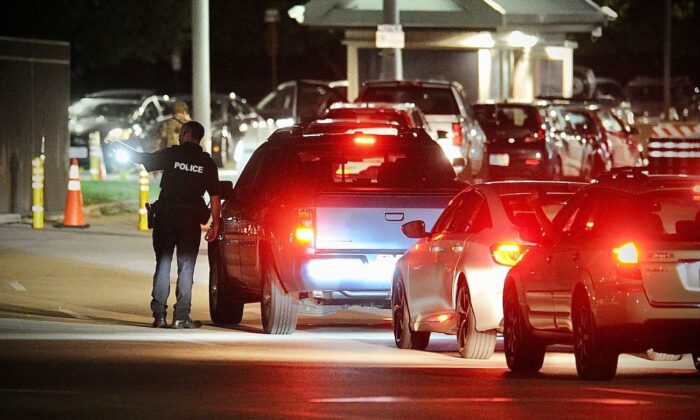 A police officer talks to a driver at a gate at Wright-Patterson Air Force Base, Ohio, near Dayton, on Sept. 9, 2021. (Marshall Gorby/Dayton Daily News via AP)
US News

Wright-Patterson Air Force Base in Ohio was placed under lockdown for more than four hours on Thursday night following reports of an active shooter.

Col. Patrick Miller, Installation Commander at Wright-Patterson Air Force Base said no threat had been identified. Speaking at a press conference on Thursday evening, Miller noted that the incident began when two people approached the security desk and reported hearing one gunshot.

The commander said it is not clear what led to the individuals believing they heard a gunshot and emphasized that there were no casualties.

He noted that improvements in procedures and communications after a 2018 false alarm incident on the base had helped with communications with regards to the latest incident, and said it had influenced the response.

Emergency responders arrived at the base at approximately 9:25 p.m following reports of an active shooter in the National Air and Space Intelligence Center in Area A, according to the post on the 88th Air Base Wing’s Facebook page.

The National Air and Space Intelligence Center is headquartered at the base, and serves as the Department of Defense’s primary source for analyzing military intelligence on foreign air and space threats.

Security forces conducted a sweep of the building while the base was placed on lockdown, a spokesperson for the 88th Air Base Wing said.

Meanwhile “lockdown” was played repeatedly over the base’s intercom system.

“We understand the situation can cause stress. In regard to the sweep being conducted by Security Forces, NASIC is an 850,000 square foot building with three stories. The protocol for responding to this kind of situation requires a full building sweep,” the 88th Air Base Wing’s post reads.

“We understand there are concerns and questions. Our first priority is to protect our people. All of our military and civilian employees are trained to quickly assess the situation and take appropriate action. More info will be provided once available,” it added.

Students and employees at nearby Wright State University were also advised to stay away from the base while officials responded to the incident, in a message sent to university members.

“Wright State Police have become aware of multiple reports that Wright-Patterson Air Force Base Police are responding to an active shooter incident on base and have initiated lock-down procedures,” the university spokesperson said in a Facebook post.

The most recent information identifies the active shooter threat at or near the National Air and Space Intelligence Center (NASIC) Building.

“Wright State students and employees should stay clear of the areas toward the north end of campus, like Kauffman Ave. and Ohio State Route 844, and take appropriate safety precautions to protect themselves if necessary.”

Wright-Patterson AFB routinely conducts active shooter drills on the base and notifies the public in advance. The last training exercise was held August 18, according to WHIO-TV.