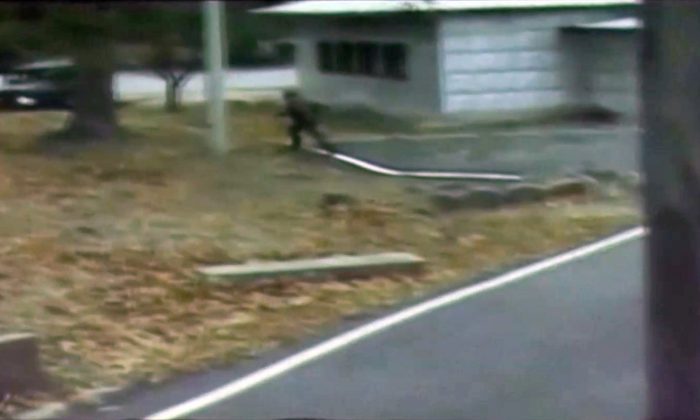 A CCTV still image shows a North Korean soldier crossing the white Military Demarcation Line during a United Nations Command (UNC) briefing on the investigation results of the soldier's defection, at the South Korean defence ministry in Seoul in this still image taken from a Reuters TV video, Nov. 22, 2017. (Reuters/Reuters TV)
Asia & Pacific

SEOUL—A North Korean soldier who suffered critical gunshot wounds during a defection dash across the border to South Korea has been transferred to a military hospital, a South Korean intelligence official said on Saturday.

The North Korean soldier, 24-year-old Oh Chong Song, was transferred to the military hospital on Friday from a trauma center at Ajou University Hospital south of Seoul, where his treatment for gunshot wounds and pre-existing conditions included two major operations.

The official, who declined to be identified, also declined to provide a specific schedule for Oh’s questioning.

Oh was shot and badly wounded by his fellow North Korean soldiers while fleeing across the border into the South in November.

Three South Korean soldiers brought Oh to safety and he was immediately taken aboard a U.S. Black Hawk military helicopter and rushed into surgery.

“Medical staff at the Armed Forces Hospital will continue to provide proper care and treatment for Oh,” a South Korean defense ministry official.

Surgeon John Cook-Jong Lee accompanied Oh, along with a few South Korean intelligence services agents and other medical crew, as he was airlifted by a South Korean military helicopter to the Korean Armed Forces Capital Hospital in Seongnam, south of Seoul.

“Oh is still recovering from two major surgeries and other minor injuries. He has not gained full strength yet, but his condition has been much stabilized,” said a person familiar with Oh’s condition, who declined to be identified.