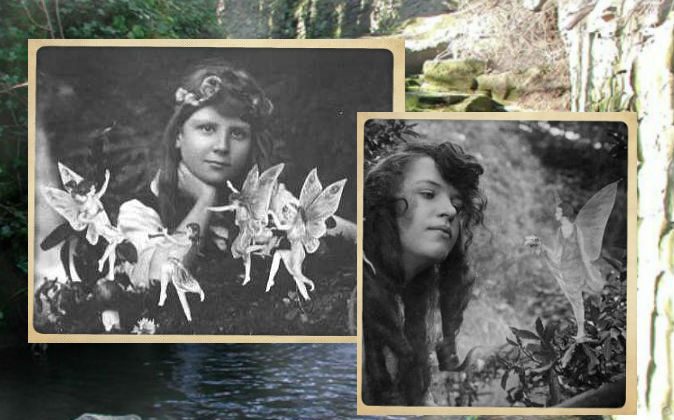 Frances Griffiths (L) and Elsie Wright (R) posing in 1917 with what they maintained for decades were real fairies. (Public Domain) Background: The beck in Cottingley, UK, where the girls took the photos. (Paul Glazzard/Wikimedia Commons)
Beyond Science

Would You Believe in the Cottingley Fairies If You Saw Them Today?

In 1917, two little girls took photos of themselves surrounded by what looked like fairies. For the next 70 years, they faced the scrutiny of critics, accusations of perpetrating a hoax. For decades, they maintained that the fairy photos were genuine. After plenty of badgering the story changed slightly, but with nonetheless intriguing implications. One of them, Elsie Wright (1901-88), told the BBC in 1977: “They’re photographs of figments of our imagination.”

Some took this as an answer to brush off the media, some took it as an admittance of fraud, others took this to mean the photos were taken psychically. Toshio Akai, a humanities and sciences faculty member at Kobe Gakuin University in Japan, explained what it means to take photos “psychically,” in his paper “The Cottingley Fairies Photographs and Spirit Photography.” At the time, Akai said, photographic expert Fred Barlow was convinced the photos “were taken ‘psychically,’ that means, the mediumship of the two girls, being enhanced with each other, enabled them to capture spiritual entities into pictures.”

Barlow was skeptical at first—he was considered an expert in psychic photography, and particulary in spotting fakes—but when an investigator from the Theosophical Society followed up with Elsie, and her cousin, Frances Griffiths, Barlow was convinced.

Polly Wright, Elsie’s mother, went to a meeting of the Theosophical Society in Bradford in 1919, at which she mentioned the fairy photos to a member, wondering if they might be real. Word got around to lead Theosophist Edward Gardner by early 1920.

Both Elsie’s parents “searched the girls’ bedroom and waste-paper basket for any scraps of pictures or cut-outs, and also went down to the beck in search of evidence of fakery. They found nothing.

Gardner went to the girls and gave them photographic plates, asking them to take more photos of the fairies. He secretly marked the plates to make sure they weren’t switched. The girls produced three more photos with fairies in them. Joe Cooper, in his 1982 article, “Cottingley: At Last the Truth,” wrote that both Elsie’s parents “searched the girls’ bedroom and waste-paper basket for any scraps of pictures or cut-outs, and also went down to the beck in search of evidence of fakery. They found nothing, and the girls stuck to their story–that they had seen fairies and photographed them.”

Famed author Sir Conan Doyle took an interest in the case, and believed the girls had indeed captured photos of these nature spirits, which he called “dwellers at the border.”

Elsie’s father was unconvinced, though her mother was persuaded to believe in fairies. Arthur Wright is quoted by Cooper as having said he found it hard to believe these men could be fooled “by our Elsie, and her at the bottom of the class!”

Prominent novelist Henry de Vere Stacpoole wrote of the photographs: “Look at Alice’s face [pseudonyms Alice and Iris were used in publicizing the photos at the time to protect the girls’ privacy]. Look at Iris’s face. There is an extraordinary thing called TRUTH which has 10 million faces and forms–it is God’s currency and the cleverest coiner or forger can’t imitate it.”

Another photography professional known to be an expert of discerning fakes, Harold Snelling, was called in to judge. Akai wrote: “Snelling’s judgment was to confirm that the pictures were not the result of double exposure, and some of the objects, especially some ‘sprites’ in the first picture, were moving actually when they were photographed.”

The photos were criticized by some as showing contemporary hairstyles and looking like magazine cut-outs. A picture book from the time, “Princess Mary’s Gift Book,” was discovered to have had very similar figures in it. Proponents of the psychic photography theory chalked this up to the girls mixing in these impressions with the fairies they saw.

In 1976, Austin Mitchell of Yorkshire Television interviewed Frances and Elsie back at the beck where the photos were taken. When Mitchell asked if Elsie faked the photographs, Frances said: “Of course not. You tell us how she could do it–remember she was 16 and I was 10. So, then, as a child of 10, can you go through life and keep a secret?”

Though Elsie said all the photographs were faked, Frances maintained that the fifth photo was not faked, even though the others were.

Though Elsie said all the photographs were faked, Frances maintained that the fifth photo was not faked, even though the others were.

She told Cooper: “It was a wet Saturday afternoon and we were just mooching about with our cameras and Elsie had nothing prepared. I saw these fairies building up in the grasses and just aimed the camera and took a photograph.”

YOU MAY ALSO LIKE: Could Fairies Be Real? Alleged Real-Life Fairy Photos, Fairy Sightings