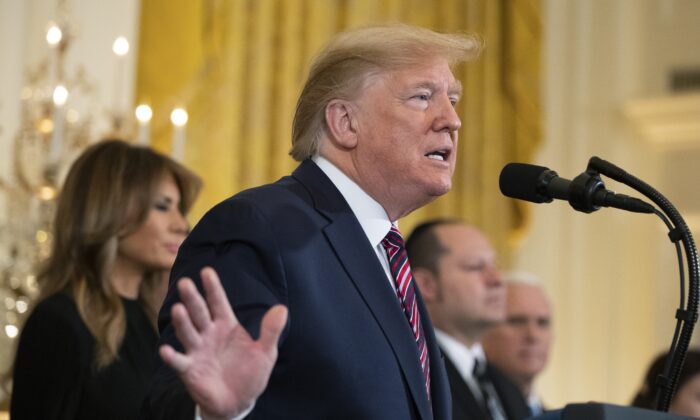 ‘Would Be Big’: Trump Responds to Democratic Congressman’s Plans to Join GOP

President Donald Trump has responded to reports that Rep. Jeff Van Drew (D-N.J.) is planning to join the Republican Party following weeks of statements to the media about how he opposes the Democrat-run impeachment effort.

“Thank you for your honesty Jeff. All of the Democrats know you are right, but unlike you, they don’t have the ‘guts’ to say so!” the president wrote on Twitter early on Sunday morning.

Trump also said it “would be big” if Van Drew switched parties, and he “always heard Jeff is very smart.”

Wow, that would be big. Always heard Jeff is very smart! https://t.co/7yDPU4N3wd

Van Drew has informed top House Republicans about his decision, according to a Republican official familiar with the conversations. The lawmaker also discussed switching parties in a meeting with Trump at the White House on Friday, said an administration official on Friday.

His office has not issued a statement about the matter yet. Numerous media outlets have reported on the development.

Members of the Democratic party were already criticizing him on social media following reports of his departure.

“This party switch is cynical and desperate, and I am confident that a Democrat who shares the values and priorities of our Democratic Party will hold this seat,” New Jersey Gov. Phil Murphy tweeted on Saturday night.

He added: “Betraying our values by siding with Donald Trump is the final straw and made it impossible for him to continue being supported by our party, as grassroots activists, local party leaders in his district, and I have made clear in recent weeks.”

Despite the widespread Democratic salvos against Van Drew over the decision to switch parties, it may prove to be a shrewd move for him. His district supported Trump over Hillary Clinton in 2016 by more than 4 percentage points.

During an interview with Fox News in November, Van Drew explained why he doesn’t support impeachment.

“[The] Founding Fathers had vigorous debates of whether they would even allow impeachment in the Constitution,” he said, adding that voters should decide who is the president during the 2020 election. “You don’t disenfranchise voters, millions upon millions of voters. Voters choose their leaders in America,” Van Drew said at the time.

“I am a moderate. I am a capitalist,” Van Drew also said in a recent interview, adding that he is closer to House Speaker Nancy Pelosi (D-Calif.) “and Trump than AOC or those folks,” referring to Rep. Alexandria Ocasio-Cortez (D-N.Y.), a freshman lawmaker who has publicly supported socialist policies.