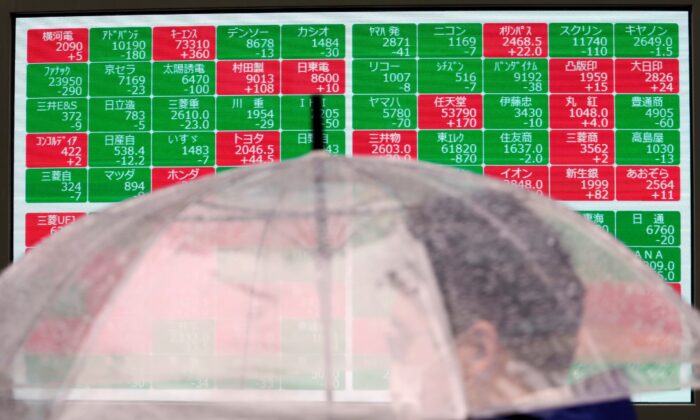 A man wearing a protective mask walks in front of an electronic stock board showing Japan's Nikkei 225 index at a securities firm in Tokyo, Japan, on Dec. 14, 2021. (Eugene Hoshiko/AP Photo)
Markets

BANGKOK—Shares opened higher in Europe on Tuesday after Asian shares followed Wall Street lower as investors awaited fresh U.S. inflation data and the outcome of a meeting of the Federal Reserve.

Benchmarks advanced in Paris, London, and Frankfurt, but fell in Hong Kong, Shanghai, and Tokyo.

The Labor Department’s Producer Price Index for November is due out Tuesday. That shows how inflation is impacting costs for businesses and is important given the Fed meeting on Tuesday and Wednesday. The U.S. central bank could announce plans to accelerate its timetable for reducing bond purchases aimed at keeping long-term interest rates low.

Markets have kept their cool despite warnings that the omicron coronavirus variant is spreading rapidly in Britain and some other regions.

Shares in Shanghai-based Shimao Group Holdings sank 20 percent in Hong Kong on concerns about its financial situation. China Evergrande Group’s shares gave up 7 percent. Evergrande is one of China’s largest developers, with over $300 billion in debt.

“Recent scrutiny has gripped hold of Shimao Group Holdings, China’s 13th largest developer by contracted sales, on its liquidity position and debt-servicing ability. That may continue to put the property sector on watch today,” said Yeap Jun Rong of IG.

Another worry is China’s first reported case of the omicron variant of coronavirus, Yeap added.

The Russell 2000 also gave up 1.4 percent, to 2,180.50 as small-company stocks fared worse than the broader market in a signal that investors are concerned about economic growth.

The yield on the 10-year Treasury was steady at 1.43 percent after falling to 1.41 percent Monday from 1.49 percent late Friday. That weighed on banks, which rely on higher bond yields to charge more lucrative interest on loans. Capital One fell 2.9 percent.

In other trading, U.S. benchmark crude rose 37 cents to $71.66 per barrel in electronic trading on the New York Mercantile Exchange. It lost 38 cents to $71.29 on Monday.

Brent crude, the basis for international pricing of crude, picked up 42 cents to $74.79 per barrel.