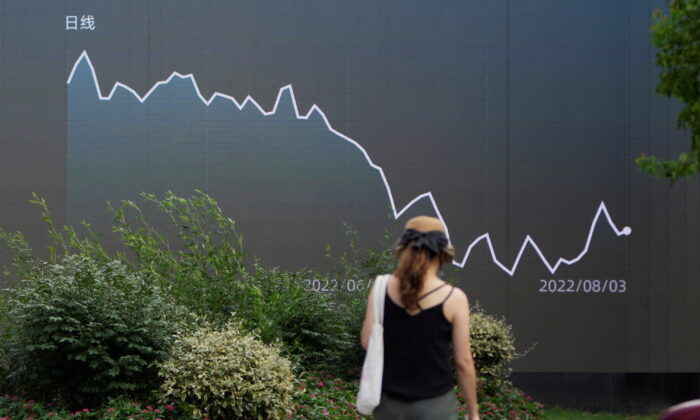 A pedestrian walks past a giant display showing a stock graph, in Shanghai, China, on Aug. 3, 2022. (Aly Song/Reuters)
Stocks

World Shares Edge Up Even as Inflation and Policy Concerns Linger

World shares edged up on Wednesday taking comfort from strong U.S. retail earnings even though the UK’s highest inflation since 1982 and a rate hike in New Zealand reminded investors of the challenges facing the global economy.

MSCI’s benchmark for global stocks was up 0.1 percent by 0829 GMT, extending its July recovery, although concerns over high inflation and policy tightening kept a lid on gains.

European shares were barely changed after a positive open. The MSCI’s broadest index of Asia-Pacific shares outside Japan added 0.2 percent, off earlier highs.

Wall Street looked set for a weaker start after strong gains on Tuesday following stronger-than-expected results from Walmart and Home Depot which bolstered views on the health of consumers. S&P 500 futures were down 0.3 percent.

But British consumer price inflation jumping more than expected to 10.1 percent in July highlighted growing pressures on households while cementing expectations of another 50 basis point (bps) rate hike at the next Bank of England meeting.

After an initial spike on the data, sterling pared some gains and was last up 0.1 percent against the dollar.

“Higher inflation should trigger a more aggressive monetary policy response from the Bank of England— a bullish signal for sterling,” said Matthew Ryan, Head of Market Strategy at Ebury.

“On the other hand, however, higher prices present a clear downside risk to economic activity, and raise the possibility of a potentially prolonged UK recession, which is clearly bearish for GBP,” he added.

Shares in New Zealand were flat. After an initial spike, the kiwi dollar turned negative after the country’s central bank announced a fourth consecutive 50-bps rate hike without giving hints of slowing down.

The hike was in line with forecasts, but Imre Speizer, head of NZ market strategy at Westpac, said the tone of RBNZ’s statement was more hawkish than expected.

In foreign exchange markets, the dollar index gained 0.15 percent to 106.64 ahead of the release of minutes from the Federal Reserve’s latest meeting which investors will scrutinize for more clues on its policy tightening outlook.

The index, which tracks the greenback against six main peers, has recovered most of the ground it lost last week after a cooler-than-expected U.S. inflation reading but remains well off its mid-July top.

Oil prices stayed near 6-month lows as worries over a global economic recession lingered, although an unexpectedly large drop in U.S. stocks provided support earlier in the day.