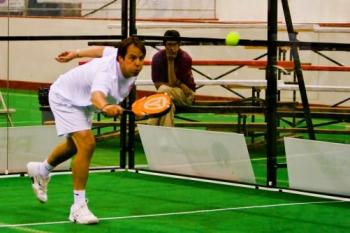 Neil Campbell
View profile
Follow
biggersmaller
Print
The action heated up during Day 2 of the World Paddle Tennis Championships featuring the first round of the Women’s Open and the second round of the Men’s Open.

In the Women’s Open, Canada’s Riva Mackie and Jane Croshaw crushed Chilean team Javiera Henriquez and Trinidad Falcone by a score of 6-0, 6-1, advancing to the final 16 where they will play the strong Brazillian team consisting of Suseje Aguiar and Tatiana Sahagoff on Tuesday.

In the men’s division, Team Canada scored a strong victory over Uruguay when Gerry Martinez and Craig Hiddleston knocked off Uruguay’s Martin Rodriguez and Manuel Amendola in a crowd-captivating 6-2, 6-7, and 6-3.

“It was a great match. The South Americans play much more of the sport than we do, so they come in and they’re more match-tough than we are, so we’re playing well. They rallied for break and we hung in there, it was lots of fun,” said Craig Hiddleston after their victory.

Hiddlestons teammate, Gerry Martinez also commented on the match, “I think we were ahead in the first set and then the points started getting longer and we haven’t played as many matches as they have. We came back, and we were able to hang in there in the first set and come out for the win.”

The duo remarked that they’re very excited going forward but they note that the competition only gets tougher from here, “It’s going to be tougher again. The Spaniards and Argentines are so solid, it’s tough to earn points. It’s a full time gig for them. We try to do as much as we can in our time, so we’re going to give them a great match,” said Hiddleston.

And the competition will indeed get tougher for the Canadians who will face the very strong Argentinean duo of Gustavo Briner and Damien Diez on Wednesday. Argentina is the defending World Champions in both men’s and women’s team play.

For Team USA, John Chun and Leo Contini also advanced to the final 16 with a crushing 6-0, 6-1 victory against Portugal’s Ricardo Soares and Ricardo Ribiero. Chun and Contini will be matched up against the tough Argentinean team of Rodrigo Ovide and Fernando Cavalleri on Tuesday.

The big match-up in men’s play today was Argentina against Uruguay. The defending champions defeated the Uruguay squad 3-0.

Uruguaian player Augustin Caorsi said after the match that they had a few extra challenges because of differences in venue from South America, “The velocity of the ball and the rhythm plays differently here than we are used to. It’s a lot harder here because of the higher altitude.”

“We don’t have glass courts back home, we have wood. We also don’t play on grass, we play on cement. In Argentina they have glass walls and grass courts, so they’re more at home in these conditions.”

“The ball is so quick, but it’s heavy,” said Caorsi.

Tuesday will show Canada against Mexico in the men’s, Team USA against Portugal, and France will face off against Belgium.