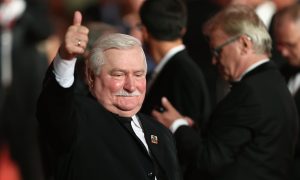 Workers in a Chinese Factory Collectively Quit the Communist Party

Chairman Mao must be turning in his grave: days before the Chinese Communist Party celebrated its 94th anniversary, the proletariats from a factory in the late Party leader’s home province decided to sever ties with the party he brought to power.

Zhang Lingcai, 60, told the NGO Chinese Human Rights Defenders that all Communist Party members in a dyeing and weaving factory in Xiangtan City, Hunan Province, had renounced their Party membership. Some of them had been in the Party for decades. It is unclear exactly how many of the 1,003 factory workers were members.

The workers were long unhappy with the Hunan authorities for terminating the benefits of the factory’s retirees, said Zhang, the representative of the factory’s self-support group—a union-like organization.

At first, the factory employees tried petitioning the local authorities, but were ignored. Later, they organized several “confrontations,” all of which were “brutally suppressed,” according to Chinese Human Rights Defenders.

Driven to “the limits of desperation,” as CHRD wrote, the factory’s Party members quit the organization en masse in protest.

The news comes in light of an official proclamation that the Communist Party had over 87 million members by the end of 2014. The Organization Department—a secretive agency which keeps the dossiers on all Party members, and makes key personnel decisions—released the news on June 29, two days before the Party’s founding anniversary.

Despite the size of the figure, the Organization Department claims that the “structure of its members has improved.” Chinese netizens remain skeptical—on Chinese social media, many raised the example of people joining the Party to secure better prospects for career advancement, a common motive.

But such numbers don’t account for phenomena like the spontaneous resignation of what are likely hundreds of Party members at the factory in Shandong recently. Nor do they account for the “tuidang movement” (tuidang means “renounce the Party”) which collates renunciations from the Party online, and says it has received 200 million resignations so far.

The Tuidang Center is the only authoritative source of resignation information—the Party itself does not tabulate such data—but it can only count resignations submitted to its website. Nevertheless, a spokesperson said they wholeheartedly support the spontaneous resignation in Hunan recently.

“This is a wonderful thing,” said David Tompkins, a spokesman for the Tuidang Center in New York, in a telephone interview.

Even though the Hunan resignations are not in their tally, Tompkins says it still counts. “We consider valid any form of quitting the Party. What’s important is that people renounce the CCP, renouncing the oath that they took,” Tompkins said, using the acronym for the Chinese Communist Party.

All Party members are required to swear an oath declaring that they will serve the Party with their lives. “It won’t be added to the 200 million, but from our perspective it is a valid tuidang statement.”

He rattled off a variety of unconventional means that people in China have devised to renounce the Party: physically stamping Chinese characters on coins and circulating them, writing a renunciation statement on money, or on a scrap of paper and sticking it to a telephone pole.

“It’s just that we can’t add it to the database unless someone actually steps forward and breaks through the Internet firewall and submits it as a tuidang statement,” Tompkins said. “If someone can do that, then it will be added once we verify it.”

The tuidang movement was started after this newspaper published the editorial series “Nine Commentaries on the Communist Party” in November 2004. Statements are recorded on a website affiliated with the Chinese version of this newspaper; the Tuidang Center, which ensures the integrity of the information in the database and directly solicits resignations, operates as an independent non-profit corporation.

Tompkins said that for many—and likely in the recent Hunan case—resigning from the Party “is simply an act of desperation. Chinese people come to a point where they realize that the CCP is just really terrible, the worst thing in Chinese society, and destructive to their lives.”