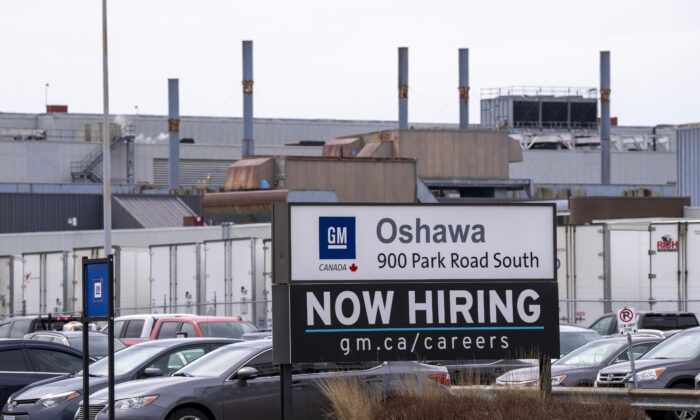 A sign announcing hiring at the General Motors facility in Oshawa, Ont., on April 4, 2022. (The Canadian Press/Frank Gunn)
Inflation

Amid record-high job vacancies and low unemployment, wages have not kept pace with inflation and workers are feeling the pinch. Unions are starting to negotiate some of the biggest pay hikes in years, but an economist says their impact on pushing wages much higher, which could make inflation very difficult to bring down, is less meaningful than the current tightness in the labour market.

“I don’t think unions are the key. I think the overall labour shortage is what’s driving this—a million job vacancies that StatsCan has recorded. You don’t need a union to tell you that you have bargaining power with your boss,” Philip Cross, former chief economic analyst at Statistics Canada and Munk senior fellow at the Macdonald-Laurier Institute, told The Epoch Times.

About 30 percent of Canadian workers are covered by unions, based on 2020 figures, with Quebec having the highest coverage at about 40 percent, and Alberta the lowest at about 26 percent.

Statistics Canada reported in its May jobs report that 55 percent of businesses in the second quarter expect inflation to be a bigger issue when discussing wage increases with employees over the coming year.

Cross says that where the sizable wage increases are coming from are instances in which people switch jobs.

A key wage negotiation, which some say could set a precedent, has the feds and the Public Service Alliance of Canada (PSAC) at an impasse. PSAC is reportedly demanding a 13.5 percent raise over three years, at an annual increase of 4.5 percent, while the Treasury Board is reportedly countering with less than 8 percent over four years, averaging 1.7 percent a year.

Cross says the government can’t give a big settlement, as that would have knock-on effects for the private sector.

“I don’t think the public sector ever wants to set the pace for wage settlements in this country,” he said.

PSAC said that it would be returning to the table in September and that wage proposals will be submitted once the employer provides payroll data.

But the PSAC negotiations are just another data point for the private sector trade union Teamsters Canada, which represents 125,000 workers, according to director of communications and public affairs Catherine Cosgrove, who cited some of Teamsters’ recent big settlements.

Teamsters Canada announced a five-year collective agreement on June 7, with wage increases from 9 percent to 25 percent for Metro Ontario warehouse workers in Ottawa, depending on seniority.

“Looking forward, our members’ expectations have never been so high. They are right to want more, given the economic context,” said Teamsters Canada president François Laporte in Montreal during the union’s Convention XIII on June 27.

Annual inflation in May was 7.7 percent while average hourly wages climbed 3.9 percent on an annual basis in May.

“In response to inflation, unions in Canada are now negotiating some of the most significant wage increases in over a decade,” Laporte added.

Union wage settlements may be starting to trend higher. Based on government data, the minimum average increases in March and April, 3 percent and 2.2 percent respectively, were higher than the biggest average wage settlement increase in January, at 2.1 percent.

None of those settlements included a cost-of-living allowance (COLA), however. That those unions didn’t push for COLA clauses could be a sign that they don’t expect inflation to persist for a long time. COLA clauses allow wages to increase based on the consumer price index at set intervals during the life of a contract.

“You can probably keep workers happy by saying ‘OK, this year, I will offset your loss of purchasing power by giving you a bonus, but I won’t build it permanently into the wage structure,’” Cross said.

He added that when average hourly earnings start rising by more than 4 percent, inflation becomes even more problematic as upward wage pressure gets embedded.

And wages are not the only thing employees are after. Work flexibility, remote work, and better benefits are all demands that could raise costs for employers and potentially consumers down the road.

Cross reiterates that the number one driving force in the labour market is the worker shortage. And given how much extra money Canadians were able to save during the pandemic due to very generous government support, that may be what’s keeping some folks at home, rather than wages not being high enough, he added.

“What is going to solve this labour shortage problem we have—I’m not sure. It could be that it’s not even that a certain wage rate is needed. We just need to use up all that savings we built up during the pandemic, and that’ll solve the problem.”

The household savings rate in Canada, of 8.1 percent in the first quarter of 2022, is still significantly higher than pre-pandemic, which was around 3 percent, though it has come down considerably from its highest point in 2021, which was 14.2 percent.

However, the labour force participation rate—the proportion of the population that’s either employed or unemployed but actively seeking work—is at a record high for core-aged workers, aged 15 and older. It held steady in May at 65.3 percent.

More union-related actions may be forthcoming. For example, at Starbucks, one of its locations in Victoria, B.C., was the first to unionize in North America.