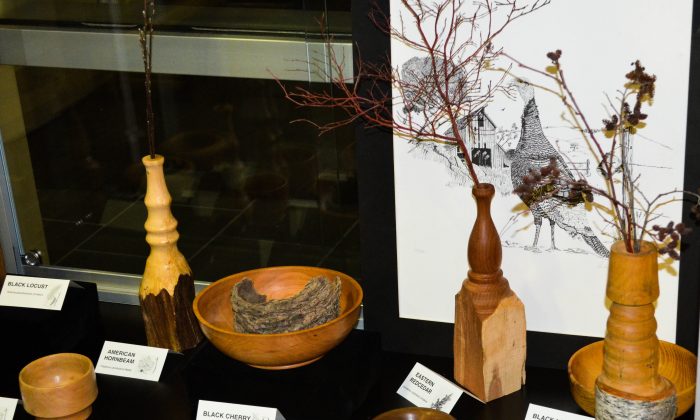 NEWBURGH—”This guy is passionate about wood turning,” said Dorothy Szefc at a demonstration by master craftsman Andy Komonchak. Szefc, cultural affairs director at SUNY Orange, made the comment after she saw a massive display of bowls at the artist’s home.

The master craftsman gave a demonstration of wood turning, “What Wood You Make?” at the SUNY Orange Newburgh campus on March 29.

The audience was filled with eager learners. Several approached Komonchak before the demonstration and at the break to discuss his technique.

Professor Martin Dominguez Ball brought his students to see Komonchak work. “We are going to be doing a sculpture with wood, too. I’ve seen his work and it’s amazing,” Dominguez Ball said. “I thought it was important for them to see an artist doing work.”

Komonchak never takes his wood from live trees. “I really enjoy the ability to go out into my woods and find a log to put on the lathe and turn it into something beautiful and utilitarian.”

He says white ash is great wood to turn. The log in his demonstration came from a tree that fell in his backyard three years ago. Trees that form two main branches have exceptional grain at the crotch where the weaker branch joins the tree.

He says white ash trees have been decimated by ash bores. “I’m losing a lot of my ash trees to the ash bore.” The emerald ash bore is an invasive species of green beetle native to Asia.

When he looks at a log, he pays special attention to the grain. “That grain is going to be in your bowl,” he said. The most dramatic pieces in his collection are created from burls. Komonchak told his audience that burls form when the tree is attacked by a disease or insect. The tree grows around the infected spot, so the grain grows in a spiral, not vertically.

Although they were formed from the tree protecting itself from an injury, they are highly-prized by wood turners. “When you’re turning a burl and look at it, it will look like marble. It has striking, striking figurations on it.”

Komonchak bought his first wood turning lathe from a craftsman who told him the tool was the cheapest part of the whole process. His lathe at home can produce bowls that are 12 inches in diameter. The one in the demonstration makes eight-inch bowls.

The lathe is a serious piece of equipment. “You have to concentrate on what you are doing. You don’t have a glass of wine for dinner and then go down and do your wood turning.”

He removes the bark at the lowest speed on the lathe. Even so, when he has finished, “you’ll have an unbelievable collection of sawdust.” The craftsman must listen to his lathe, especially when adjusting the rest that balances the piece on the lathe, Komonchak said. “If you start to hear your tool chattering, making noise rather than just slicing, your rest is getting too far from your work.”

Sometimes a piece in process can fly off the lathe, especially when the turner gets a catch. “When you are working and your bowl goes ‘bwacks,’ it breaks almost like glass.” He makes sure the log is as round as possible. “If it’s not round, it can make your lathe jump. It will dance right across the floor,” Komonchak said.

The faster the speed, the smoother the cut. Komonchak touches his piece often while turning. “It’s a very tactile business that you’re doing here.” He lets the lathe do most of the work before he sands. “You want the surface to be as smooth as you can get it before you go to sanding. You don’t use sandpaper to do the work for you.”

Komonchak wears face gear for protection from flying chips. He has installed a vacuum system in his workshop that take in the dust from sanding.

He uses a bowl gauge to remove the bark. It starts with a chatter. “When you hear just the whirring, you know you’re down to perfect round.”

Because of the way grain goes while on a lathe, he says he has never gotten a splinter. “You don’t have to worry about your fingers.” However, if the wood turner presses hard while the piece is turning on the lathe, he could get burned from the friction.

Komonchak said there are always surprises when he is working on a piece. “Sometimes it opens up and you’ve got the most wonderful grain that all of a sudden appears.”

He may also find other, foreign objects, such as “maple syrup taps that somebody pounded in and didn’t take out. You hope that they are made out of wood not metal.”

As he finished his demonstration piece, art student Elizabeth Mason asked how Komonchak preserves his pieces when done. Komochak uses a product similar to jeweler’s rouge called Triple E Ultra Shine, a paste with a very fine abrasive. The product makes the piece brighter and brings the grain out, according to Komonchak.

“You will really see the difference in the grain,” Komonchak said, when the paste is applied.

He uses all natural products. “You could eat off of this.” Some craftsmen use beeswax, mineral oil, or lemon oil.

Komonchak doesn’t sell his finely crafted pieces—he gives them away. He says he has never had to buy a gift.

Now living in Bloomingberg, Orange County had been Komonchak’s home for 28 years. He retired from a graphic arts business four years ago. In 2010, he received Orange County’s Pinnacle of Leadership Award. At the Cortland and Farmingdale SUNY campuses he received a degree in Commercial Art and Design.