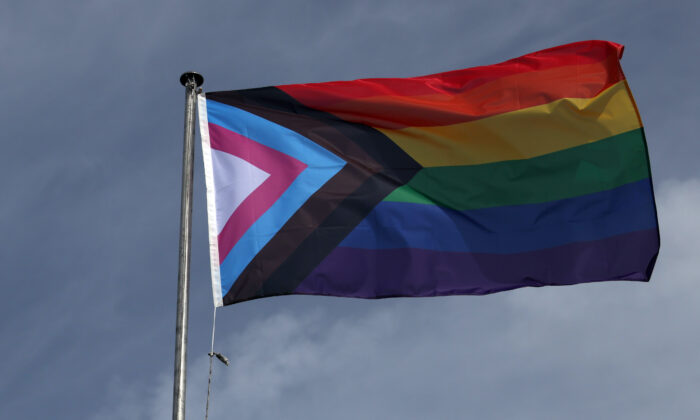 A Pride flag above the Grand Stand during day five of the cinch Championships at The Queen's Club in London on June 17, 2022. (Luke Walker/Getty Images for LTA)
UK

A journalist is suing Nottingham Council after the town’s councillors cancelled her talk at a library because of her views on transgender rights.

Julie Bindel has said that Nottingham Council “don’t realise what they have done” and “have started a fight I doubt they can win.”

On Saturday, Bindel had been invited by the Nottingham Women for Change group to Aspley Library to give a talk on the increasing threat of male domestic violence and rape.

Bindel is the co-founder of Justice For Women, an organisation that supports and advocates for women “who have fought back against or killed violent men.” She has also written and spoken extensively on what she calls the “tyranny of trans extremism.”

‘We Took the Decision to Cancel the Booking’

It said that this was “due to the speaker’s views on transgender rights being at odds with aspects of the council’s Equality, Diversity, and Inclusion Strategy.”

“This was a private booking at Aspley Library by the ‘Nottingham Women for Change’ group and all ticket sales and marketing of the event had been undertaken independently with no input from the council,” they wrote.

“While it was known that the event was going to be from a feminist perspective, no information around the speaker’s views on transgender rights was brought to the Library Service’s attention,” they added.

“Once we became aware of this, we took the decision to cancel the booking. Nottingham is an inclusive city and as a council we support our LGBT community and have committed to supporting trans rights as human rights through Stonewall. We did not want the use of one of our library buildings for this event, taking place during Pride month, to be seen as implicit support for views held by the speaker which fly in the face of our position on transgender rights,” said the councillors.

Bindel subsequently refuted the charges that she was “bigoted and transphobic” in an op-ed for the Mail on Sunday titled “Why I’m suing the council that tried to bully me into silence.”

“On behalf of every woman who is being told to shut up and stay quiet, during the worst misogynist backlash I have witnessed in my lifetime, I’m taking the council to court,” she said.

She added that “they have discriminated against my basic rights as a woman and as a lesbian. They have erased my freedom of speech and they have grossly libelled me. For this, they are going to be made to pay.”

‘To Abandon the Talk Was Unthinkable’

Bindel said the event was held outside in the car park, but a small group of trans activist protesters shouted abuse at her.

The LGBT charity Stonewall has received increasing scrutiny for its lucrative diversity programmes, controversial advice to organisations, and alleged influence on public policy.

Bindel added that anyone who states the “obvious fact that women don’t have penises is automatically a bigot in Stonewall’s eyes.”

“Nottingham city councillors don’t realise what they have done. By illegally banning me from giving a talk at one of their libraries, they have started a fight I doubt they can win,” she wrote.

“To abandon the talk was unthinkable. Every ticket had sold, which meant there were dozens of women eager to learn how they could get involved in campaigning to end rape and domestic abuse,” she added.