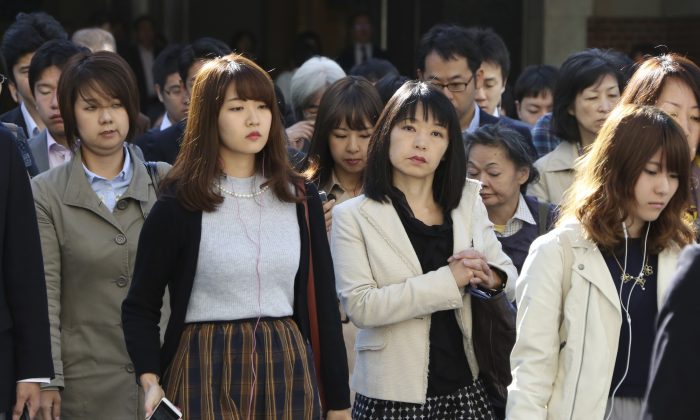 The central government exceeded its 30 percent target for hiring of women for career-track positions, raising the rate to 34 percent this year from 24 percent last year, according to the latest Cabinet Office data. In the private sector, women make up a slightly higher percentage of managers and presidents than they did two years ago, though men still make up more than 90 percent of both categories.

Japan lags behind most other industrial countries in women’s participation and advancement in business, academics, and politics. Abe’s “womenomics” policy aims to put more women to work to counter a chronically low birthrate and shrinking workforce, but a business culture in which long hours are routine makes it more difficult for women to get ahead. That’s because women often have not only the bulk of child care duties, but also the responsibility for providing care for elderly parents.

Women represent only 11 percent of all managers and supervisors, and a key reason, many say, is the impossibility of balancing work and family commitments that are viewed as a lower priority by both employers and co-workers. Sixty percent of working women quit jobs with the birth of a first child, according to Labor Ministry data.

“I’m pushing myself to the limits of my capacity, and I feel bad about imposing a lot on my children, always rushing,” says Aya Oikawa, 35, who returned to her job at an apparel company in April after an eight-month maternity leave to have her second child.

Oikawa is supposed to work an hour and a half less than the normal 9 hours so she can pick up her kids at child care. But she’s routinely asked to put in overtime, forcing her to sprint to get the children before the nursery closes, pick up groceries, and get the kids fed, bathed, and in bed by 9 p.m.

Exhausted, she is sometimes dozing when her husband finally gets home. What’s left for him? Dishes and taking out the garbage—typical for most husbands.

Instead of leaning in for more career opportunities, Oikawa is considering switching to a less demanding job and says she’s not interested in leadership roles. She said the few women she has seen in her company who have taken on such positions were all single and sacrificed everything for work.

“If that’s what it takes, I’m not interested,” Oikawa said.

And while more is being asked of Japanese women in the working world, men do not appear to be stepping it up at home. Annual surveys by the Cabinet Office, in charge of gender equality, show that married Japanese men spend only about an hour a day on chores and child-rearing, and only 2 percent of working fathers have taken paternity leave.

Abe’s policies do not address the problem of excessively long working hours or of hiring and pay practices that keep many single or divorced mothers locked into low-paying, part-time contract jobs, experts say. Unfavorable treatment of working mothers is so endemic that there is even a Japanese word for it: “mata-hara,” or maternity harassment.

What should change is the way men work. But the government is merely urging women to work harder and give birth to more babies.
— Mari Miura, professor, Sophia University

“What should change is the way men work. But the government is merely urging women to work harder and give birth to more babies,” said Mari Miura, a gender equality issues expert at Sophia University in Tokyo. “You can’t just increase the number of women on management positions without addressing those issues. You have to change the way you work. Those numerical targets don’t give incentives for the employers, even with those subsidies.”

Hiroyasu Shimozono, president of Key Company, a recruitment consultant, said Japanese employers are increasingly seeking to hire capable women, and are more willing than before to encourage their career advancement and accommodate their needs, but progress is still limited to major corporations. Many small to medium companies contend that they cannot afford to make such changes, he said.

In August, Japanese lawmakers approved a law requiring large employers to set and publicize targets for hiring or promoting women to management positions. Taking effect in April 2016 and due to last 10 years, it only applies to companies with 300 employees or more.

But most Japanese work at small and medium companies. The law also does not require the targets to be met, or to give equal pay for equal work.

Kyoko Kishida, a Labor Ministry official in charge of equal employment, says the government plans to have companies disclose data related to female hiring, promotion, benefits, and support measures. Publicizing that data will affect companies’ reputations and give them incentive to change. The government also plans to recognize companies that make progress.

“Employers that are not making the effort would eventually pay the price,” Kishida said.

The “womenomics” agenda, however, has so far done little to address the rapidly growing problem of elder care. More than 95,000 Japanese, 80 percent of them women, quit their jobs to care for relatives, mainly parents, last year.

“While child-rearing is rather predictable, caregiving is like being stuck in an endless dark tunnel,” says Fumiko Makino, a counselor for caregivers.

The heaviest burden falls on single women in their 40s and 50s—people like Masako Sugiura, 51, who began caring full time for her 74-year-old mother after she developed dementia, and for her slowing 80-year-old father.

Sugiura has nearly used up her savings, and needs part-time work or a job close to home so she can feed her mother during her lunch break.

“I’m getting desperate, but I don’t know how I can manage work and caregiving,” she said. “People seem to take it for granted that taking care of elderly parents is a woman’s job.”

The government offers elder care assistance, including domestic helpers and day-care-center activities, but there is a dire shortage of affordable nursing homes. Employers are required to make some accommodations, but some workers are hesitant to use them out of fear it will affect their performance evaluations.

Abe recently vowed to ensure that “zero” workers will have to quit their jobs to care for elders, but it’s unclear how that goal would be achieved.