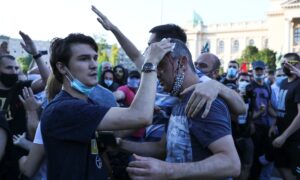 A bundle of police crime scene tape in a file photo. (Apu Gomes/AFP via Getty Images)
US News

A woman who is accused of coughing on a baby in San Jose, California, at a store has lost her job with a local school district.

The Oak Grove School District said in a statement that the unnamed woman is no longer an employee at the district. It didn’t provide her identity.

“We want to inform our community that the District employee who was alleged to have engaged in this conduct is no longer an employee of our District,” it wrote. “The Oak Grove School District’s highest priority is the safety of our students and the well-being of all of the children in the community we serve.”

The incident took place at a Yogurtland.

It added that it doesn’t “tolerate conduct from any employee that compromises any child’s safety,” especially as it welcomes “students back for learning this summer and in the fall in these unprecedented times, the District’s commitment to creating and maintaining a safe environment for our students is unwavering.”

Several weeks ago, police in San Jose said they were searching for the woman, who is accused of coughing in the direction of a 1-year-old child. She was identified as a white female in her 60s, according to a press release.

A “preliminary investigation revealed the suspect was upset the female was not maintaining proper social distancing, so the suspect removed her face mask, got close to the baby’s face, and coughed 2-3 times,” police said. “The suspect left the scene and has not been identified or apprehended.”

Surveillance video purported to show the incident. The woman, wearing a white mask, is seen inside the store before a mother pushing her child in a stroller approaches her. In another video, the suspect is seen coming up to the mother and child before coughing in the direction of the baby.

A San Jose Police spokesperson told The Epoch Times in late June that no suspect has been arrested.

“We are following up on leads, but no one has been arrested. We can’t release names of suspects until they are wanted by an arrest warrant, booked into jail, or issued a criminal citation,” the spokesman said in an email.

Mireya Mora identified herself as the mother of the baby seen in the footage.

“I can’t believe that someone has the heart to do this—and why?” she told a local news outlet. “My child did nothing wrong. I’m pretty sure he’s going to be traumatized from now on.”

Mora stipulated that she was maintaining social distancing guidelines.