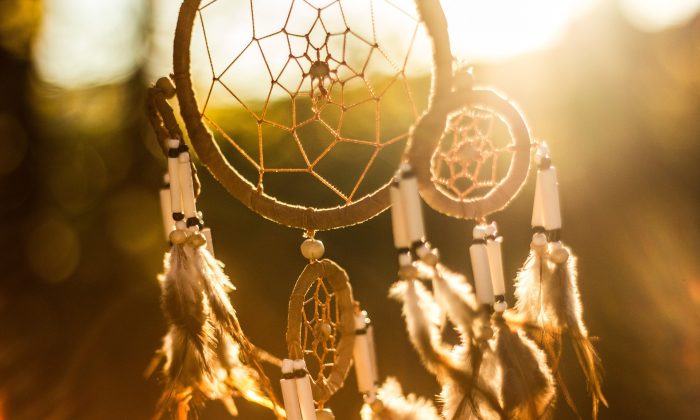 Grace Lark* is an environmental lawyer by trade, and a leading expert in that field. But she also upholds justice with strange abilities to intuitively find lost objects and return them to their owners, and to find lost people by tracking them in her dreams.

Actually, these abilities aren’t so “strange” if viewed through the lens of Native American culture, she said.

“In the dominant Western culture, objects and nature are inanimate,” Lark said. “My indigenous friends, however, see the world with far different eyes. In a world where nature communicates, the dead can intervene, and objects have powers, then the absence of what we call ‘coincidences’ is almost startling.”

Lark was in an antiques mall. She has an interest in Native American artifacts (she was an archaeologist before turning to environmental law), and loves to rummage for treasures.

She was in a store in the basement of the mall, and in a dark corner a crate sat on the cement floor. In the crate was a photograph of a Native American with war paint on his face and a beaded medallion. Her heart raced when she looked at it.

In her mind, she thought of a powerful Native American man she knows. She asked if she should bring the photo to him. She felt the answer, “No.” Instead, another friend of hers came to mind.

She felt the answer, ‘No.’ Instead, another friend of hers came to mind.

She showed this friend the photo. It was of his twin brother who had died in Germany during World War 2.

The photo belonged to his sister, but it was taken from her. Her ex-husband had stolen many of her belongings and said he destroyed them. This photo was among the things she thought she’d lost forever.

Recovering this photo through such a “coincidence,” the woman felt as though her brother had returned. “I don’t know that she knew how to grieve,” Lark said. The photo helped her grieve.

Recovering this photo through such a ‘coincidence,’ the woman felt as though her brother had returned.

Many of the things Lark finds and returns have similarly mended injustices and healed wounds.

She was on a trip in Santa Fe, from her home in Iowa, and unexpectedly had to stay an extra day. With the extra time, she decided to check out a thrift shop, and there she found a Native American shield that looked very old.

Again she had this sense that it was connected to a family she knows. She sent some members of that family a photo of the shield and wrote, “Who lost this shield?”

It had been inherited by one of the brothers in that family, but it was stolen from his truck when he drove it to Santa Fe for repairs six years earlier.

She found another family heirloom that had been stolen. The person who stole it had told the owner that his son, 5 years old at the time, had broken it. When it was recovered, a wound in the relationship between the father and son was healed.

In another case, an object left to a child by a deceased parent was lost. “To get that back for that child says to that child that they were not forgotten, that they were loved,” Lark said. “That is mending at a level that is amazing.”

She has found some 70 objects this way for people in four tribes.

It is hard to describe the intuition that draws her to objects and the people who lost them, Lark said. “It’s like I hear or see something; sometimes objects call me with like this magnet feeling. I often can find the story … somehow it says that person’s soul to me.”

Sometimes objects call me with like this magnet feeling.
— Grace Lark

It doesn’t just work for Native American artifacts. She was looking for a Leopold desk for her husband. Her husband has a connection with the famous late ecologist Aldo Leopold, whose father founded the Leopold Desk Company.

Looking online, she found one that was $300 plus hundreds to ship. The next day, she went to a thrift store and found one on sale at half-price for $20. She had never seen a Leopold desk at a thrift store before that and she has only seen two of them in the 15 years since that incident.

She has a talent for finding what she needs when she needs it.

She has heard of “finders” in Native cultures. At a recent Native American conference, she heard how a dream tracker found a lost birch-bark scroll by seeing its location in a dream.

Lark doesn’t dream about the objects she finds, but she does dream about lost people to help find them.

She dreamed of her friends in Mexico who were helping street kids. Ten of the kids had gone missing. In her dream, she saw the way into a room, and she saw an artist who wasn’t wearing any pants.

Because of the strange artist she described to her friends, they knew in which local building to look. The kids, aged 4 to 14, had indeed entered this abandoned building and found this room as Lark described it.

The building had collapsed and they were trapped there for four days.

Lark once met a policeman who told her his police department regularly uses dream trackers.

Lark sees shopping addictions as a skewed outlet for hunting and gathering instincts. She uses hers for the good of the community.

Her garage is full of household items she has found on sale to give to the poor. Her love of looking in thrift stores and other places for objects with meaning helps people find lost things.

She imagines a reality TV show: people are challenged to shop on a budget for victims of a house fire who lost many of their belongings. This is the kind of thing that could foster helpful finders.

Telling her story, Lark hopes to encourage young people who may have similar abilities, but don’t understand them, to use them.

“It’s been a fascinating personal experience,” she said. It’s hard to share with others, because our culture doesn’t have an appropriate language to describe it, she explained.

It’s also not as “scientific” as our culture likes phenomena to be: “I don’t think that I could replicate it in a laboratory,” she said. “It’s a much more nebulous.”

“It becomes a secret part of my life, because it’s just too hard to describe.”

*Grace Lark is a pseudonym. Lark preferred to remain anonymous.