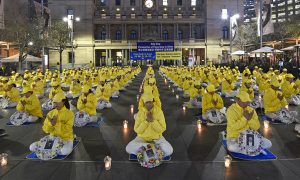 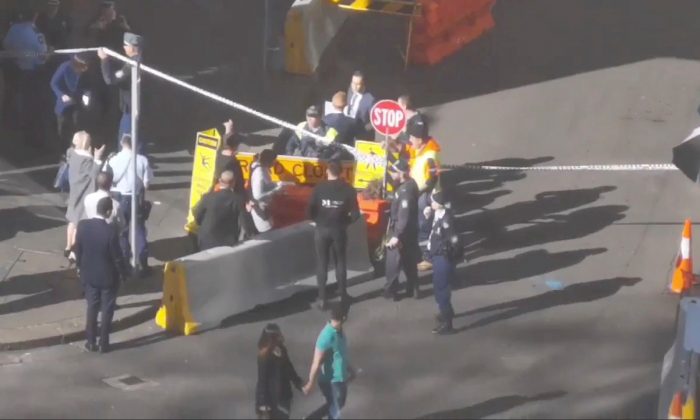 People walk past security officers standing around a barricaded area, following reports of a stabbing incident in the central business district of Sydney, Australia on Aug. 13, 2019, in this still image from video obtained via social media. (Twitter @THEBORINGGIT via Reuters)
Australia

SYDNEY—A woman was taken to hospital after being stabbed in downtown Sydney on Aug. 13, in what appeared to be an unprovoked attack by a man who was restrained by members of the public and then taken into custody, police said.

The body of a woman found dead in a nearby apartment is thought to be linked to the street attack.

The unidentified man had also tried unsuccessfully to stab other people on the street, police said, in an incident that brought the central business district in Australia’s largest city to a standstill in the early afternoon.

According to the BBC, video footage shows the suspect shouting “Allahu Akbar” and “shoot me”, jumping on a car with a knife, as another man confronts him with a wicker chair.

“We have a female person with a stab wound to the back currently being treated by paramedics and is en route to a Sydney hospital,” Police Superintendent Gavin Wood told reporters in Sydney.

He said the woman’s injuries were not life-threatening.

Wood also said the attack appeared to be unprovoked but police were keeping an open mind.

Police were also investigating whether the body of a woman found inside an apartment near where the stabbing took place was linked to the incident, a New South Wales state police spokeswoman said.

“All the information we have at hand would link these two crimes,” police commissioner Mick Fuller said at a later press conference, reported the BBC.

He said he was known to police but “his history was unremarkable compared to the gravity of the crimes he committed”.

He “had some ideologies related to terrorism, but he has no apparent links to other terrorist organizations,” the police commissioner added.

The stabbing is not currently being classed as a terrorist incident, but that is subject to change, said Fuller.

#BREAKING: Police have confirmed a woman has been found dead on Clarence Sreet in Sydney’s CBD. #9News It’s believed to be linked to the stabbing attack: https://t.co/8n6rLh94cR #9News pic.twitter.com/JI0RmWCV8W

The man, who was yelling, fell to the ground when the car moved and was confronted by a person holding a chair, the video showed.

Other footage showed the man pinned to the ground by several people holding two chairs and a milk crate on top of him.

I can’t begin to describe the bravery of these people today. With no fear for their own safety their priority was to stop anyone else from getting hurt. It was terrifying to be part of and heartening to see strangers stepping up together. @7NewsSydney https://t.co/Shnju3gZNd

“The attacker is now in police custody following the brave actions of those who were present at the scene and were able to … restrain him,” Morrison said.

The violent attack that took place in Sydney this afternoon is deeply concerning. The attacker is now in police custody following the brave actions of those who were present at the scene and were able to able to restrain him.

A woman who answered the telephone at a Subway store near the scene told Reuters, “We saw the person with a knife over there bleeding.

“The cops are here and they blocked the road right now, so we can’t go outside. They said, ‘It’s a crime scene, you can’t come out,'” said the woman, who declined to give her name.