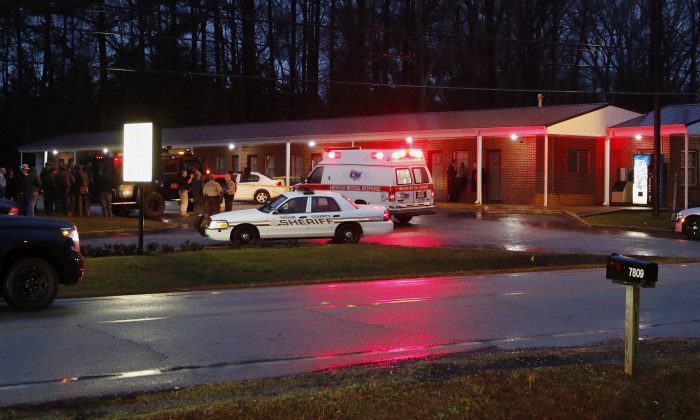 A man suspected in the killings of three women is dead after a standoff on Feb. 7, 2017, with police at a Georgia motel, and a female suspect has been arrested, a U.S. (Todd J. Van Emst/Opelika-Auburn News via AP)
Crime and Incidents

Woman Jailed in Georgia After Bloody Rampage Across South

A woman faces multiple charges in two states after surrendering to authorities following a standoff at a Georgia motel. The standoff, which resulted in the deaths of four women, involved another suspect who later later shot himself.

A tip called in about 2:30 p.m. Tuesday led law enforcement to a motel in West Point, Georgia, where Mary Rice, 37, and William “Billy” Boyette, 44, were holed up in a room. Troup County Sheriff James Woodruff told reporters that deputies had set up a perimeter and the SWAT team was preparing to enter the room when Rice stepped outside and surrendered. Moments later, a gunshot was heard and deputies found Boyette dead inside the room.

The pair had been on the run since Jan. 31, when the bodies of two women, Alicia Greer, 30, and Jacqueline Jeanette Moore, 39, were found at the Emerald Sands Inn in the Florida Panhandle. They also were suspected in the Feb. 3 death of Peggy Broz, 52, across the state line in Lillian, Alabama. Authorities said they took her car, which was later found in Pensacola.

Early Monday morning, Rice and Boyette went to the home of Kayla Crocker, 28, in Beulah, Florida, where they shot her and took her car, according to Escambia County Sheriff David Morgan. They were spotted on surveillance video a short time later at a nearby gas station and in a Hardee’s restaurant. Crocker died Tuesday, according to authorities in Pensacola. Her 2-year-old child wasn’t injured.

Investigators are still reviewing whether Rice will be charged in connection with the shooting of Crocker, Florida First Circuit State Attorney Bill Eddins said Wednesday.

A citizen on Tuesday afternoon spotted the stolen vehicle the two were seen driving and alerted authorities who surrounded the west Georgia motel, Woodruff told reporters, according to video posted online by WTVM-TV.

Rice remained at the Troup County Jail in west Georgia on Wednesday, where she was being questioned by investigators from Florida and Alabama.

Authorities in Alabama had issued capital murder warrants in the case earlier Tuesday as the search for the pair entered its second week.

Agencies across the Panhandle and southern Alabama earlier had been told to consider Rice a person of interest in the attacks. On Monday she was upgraded to an official suspect. Authorities said she had had multiple chances to flee or ask for help.

Authorities have given no motive for the four killings or said how the suspects may have chosen their victims.