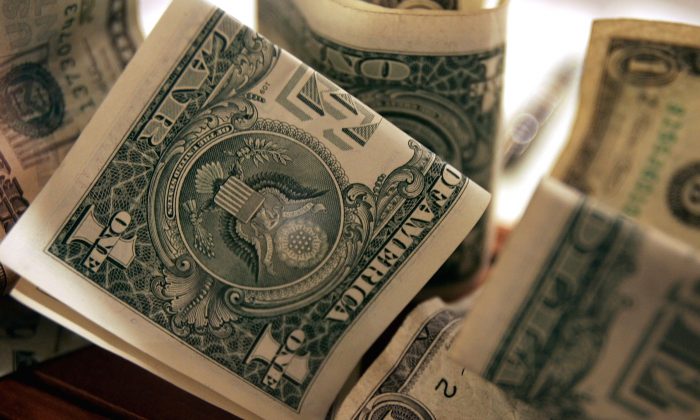 A Kentucky woman said she ended up in the hospital with an accidental overdose after she picked up a $1 bill on the ground.

“My body went completely numb, I could barely talk and I could barely breathe,” Renee Parsons wrote on Facebook, claiming she accidentally overdosed.

Parsons’s family was traveling to a Dallas-area conference when they stopped at a McDonald’s in Bellevue, Tennessee. Renee then spotted the dollar bill on the ground and attempted to collect it, her husband, Justin Parsons, told local media.

“I see a dollar bill on the ground. Thinking absolutely nothing of it—I picked it up,” Renee wrote on Facebook. She said that within minutes, her body went numb, and she could barely move or breathe.

“It’s almost like a burning sensation, if you will, that starts here at your shoulders, and then it just goes down because it’s almost like it’s numbing your entire body,” added Renee, who said she lost consciousness.

Justin told local station News 2 that “she looked like she was dying” and was “certainly was unconscious and very pale.”

After she was taken to a nearby hospital, staff treated her for an accidental drug overdose before she was released after four hours, according to reports.

The couple told local outlets that her toxicology report did not test positive for synthetic drugs, but they said they’re confident the $1 bill contained fentanyl or another powerful drug.

However, the Metropolitan Nashville Police Department said that they did not find traces of synthetic drugs on the dollar bill. But they destroyed it anyway, according to local media.

Dr. Rebecca Donald, an assistant professor of anesthesiology and pain medicine at Vanderbilt University, told WSMV-TV that it was not likely fentanyl.

“It is much more likely for her to have a reaction if she had inadvertently rubbed her nose and exposed that drug to some of the blood vessels in her nose or licked her fingers or rubbed her eyes,” Donald said.

“You know ingesting something is a different story than touching something. Your skin is a really good barrier and will likely protect you and you won’t just randomly overdose from just any medicine you are touching for a short period of time,” Edwards said.

In June, the Perry County Sheriff’s Office issued a warning after fentanyl-laced cash was found at two different gas stations in Tennessee.

Correction: This article has been updated to correctly describe Renee spotting the dollar bill. The Epoch Times regrets the error.