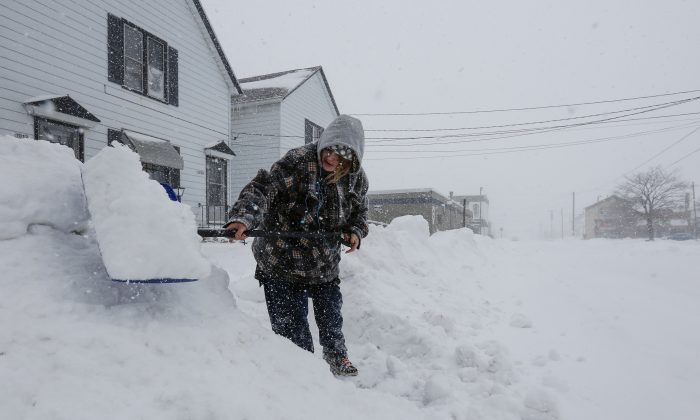 A woman shovels her neighbor's driveway during a snowstorm in Manitowoc, Wis. on Jan. 28, 2019. Three people are believed to have died from the polar vortex in Milwaukee County, including a 38-year-old woman who froze to death on Jan. 30, 2019. (Joshua Clark/The Post-Crescent via AP)
Crime and Incidents

A 38-year-old woman was found frozen to death in her apartment in Wisconsin, authorities said.

The Milwaukee apartment was unheated amid the polar vortex, which brought bitter temperatures to the Midwest.

She was pronounced dead on Jan. 30 at 7:37 p.m. by the Milwaukee County Medical Examiner’s Office.

“For a person to freeze to death in her own home is absurd to me. It never should happen,” Isaria Encarnacion, who lives nearby, told RTV 6. “Thirty-eight is too young to die.”

“I’m in shock,” said Darlene Escalante, who lives in the apartment below the victim. “It’s so sad. How is it even possible? My heat is working perfectly. I didn’t know her well, but we would see each other sometimes. To know she froze to death upstairs, right above me, is so hard.”

The medical examiner said that an investigation revealed that the thermostat in the apartment malfunctioned, reported the Milwaukee Journal-Sentinel.

The woman’s name was not released and an autopsy was pending to determine the cause of death.

Temperatures in the area plunged into the negatives in Wisconsin; in Milwaukee, the wind chill reached -47 degrees Fahrenheit on Wednesday, according to the National Weather Service. Thursday’s low temperature was -23 degrees.

The office also responded to a man found frozen to death in his backyard in Cudahy on Jan. 31.

A 38-year-old woman was found frozen to death in her unheated home on Milwaukee’s south side. https://t.co/knhsCyYg9c

The man was also not publicly named but was identified as a 62-year-old who was found after he didn’t show up for work.

“It’s startling. Don’t know what happened to him. They found him frozen to the ground. What happened, don’t know,” Roman Zukowski, a neighbor, told Fox 6.

“He’s an outdoors guy. You’d see him outside all the time. Shoveling, and running around with his dogs. I thought he was pretty healthy.

“He was a really quiet guy, kept to himself. I know he really liked his two dogs. I always saw him playing with those two boys outside,” added Chris Holubowicz, another neighbor.

A third death in Milwaukee County came on Tuesday as a 55-year-old man was found in his garage.

An 18-year-old premedical student froze to death on Jan. 30, as the bitter cold and harsh winds from the polar vortex were blamed for at least a dozen deaths.

Gerald Belz was found unresponsive at about 2:48 a.m. outside his University of Iowa residence hall.

He was rushed to the hospital but was pronounced dead.

At the time of his death, the air temperature in Iowa City was 22 degrees below zero with a wind chill of 51 degrees below zero, the Iowa City Press-Citizen reported. In such extreme cold, hypothermia can happen in as little as five minutes if the person is wearing inadequate clothing or has any skin exposed.

Michael Belz, the father of Gerald, told KCRG that doctors told him that no alcohol was found in his son’s system at the time of his death and that they believe the death was weather-related.

He said that Gerald was sending messages to his girlfriend via Snapchat late Tuesday into Wednesday and indicated that he was going to bed and didn’t have plans to go out.

“We don’t want the memory of Gerald being that he was a young, underage college student out drinking,” he added to The Gazette.

He described his son as a quiet, tough, compassionate guy, who wanted to be a doctor from a young age.