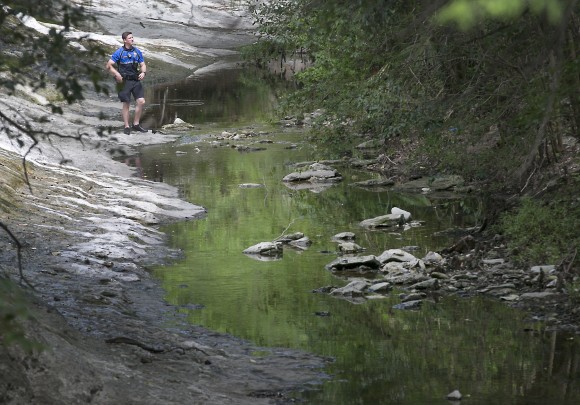 Law enforcement is continuing their investigation of a woman who was found dead along Waller Creek, behind the University of Texas at Austin Alumni Center on April 6, 2016. (Ralph Barrera/Austin American-Statesman via AP)
Crime and Incidents

A woman found dead in waters nearby Austin’s University of Texas has been identified as first-year student Haruka Weiser, according to a statement released on April 7 from the university’s president, Gregory L. Fenves.

Weiser was a “beloved member of our dance community” who studied Theatre and Dance, the statement reads. She was recruited to the college from Portland after performing at a high school dance festival in 2014.

Police have released a video of who they’ve identified as a suspect.

“Trained in ballet, Haruka excelled in all her performance endeavors. She was also involved in Dance Action, a student-run organization for dancers,” he said. “Our community was made better by her decision to join the College of Fine Arts.”

She was reported missing on April 4 and a search was initiated. The next day, she was found, a victim of a “horrifying and incomprehensible crime,” the statement said.

In the statement, the president said the school is “working with University of Texas Police Department (UTPD) and other law enforcement agencies to locate and apprehend a suspect quickly.

“Law enforcement is fully engaged to do everything to bring the perpetrator who committed this crime to justice,” he said.

At this time, the cause of death is unclear. Her body was found in an on-campus creek near the alumni center and football stadium.

Her death is being investigated by local authorities as a homicide.

Police have released a video of who they’ve identified as a suspect; he is a 6-foot tall black male, last seen riding a pink or red woman’s bike with white accents.

There is a $15,000 reward for anyone who provides information leading up to his arrest.