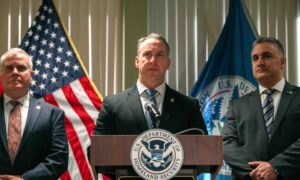 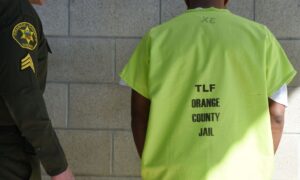 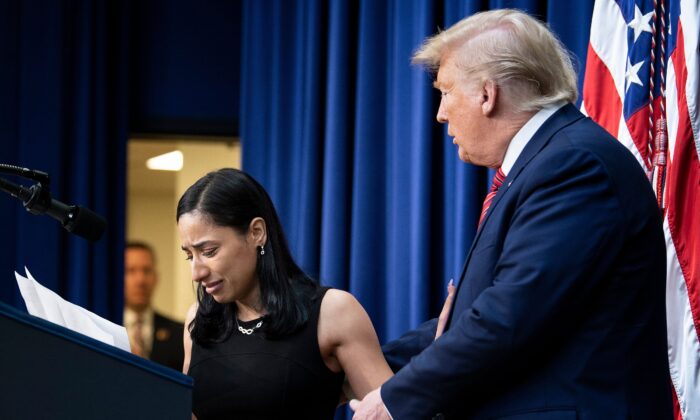 President Donald Trump reaches for Daria Ortiz, granddaughter of murder victim Maria Fuentes, as she speaks to members of the National Border Patrol Council (NBPC) in the South Court Auditorium of the Eisenhower Executive Office Building at the White House in Washington on Feb. 14, 2020. (Brendan Smialowski/AFP via Getty Images)
US News

The granddaughter of a 92-year-old woman who was raped and murdered in New York City last month has blamed “sanctuary city” policies for the woman’s death.

President Donald Trump invited Daria Ortiz, 19, one of victim Maria Fuertes’s grandchildren, to speak during a border security event on Feb. 14 at the White House, where she told the audience that her grandmother would still be alive if the alleged assailant had been turned over to the feds after earlier arrests.

Daria Ortiz is the granddaughter of 92-year-old Maria Fuentes, who was raped and murdered by an illegal immigrant in Queens.

A visibly emotional Ortiz began her speech by telling the audience that her grandmother had legally immigrated to the United States from the Dominican Republic and was a “very generous and educated woman” who “dedicated her time to helping others.”

“She is a shining example of when people come legally to this country, work hard and do the right thing, and are law-abiding citizens,” Ortiz said through tears. “Unfortunately, my grandmother had to be example of why something like this, [these] horrific crimes, should never happen.

“Our families hope is that her death was not in vain and that preventative measures are put into place to ensure that nothing like this ever happens to anyone again. The tragedy in all of this is that this could have been avoided had there been no sanctuary law. The tragedy is my grandmother is not ever going to be here again.

“The man that is responsible for this should never have had the opportunity to do this, had his multiple offenses not been ignored. The system not only failed our family, but they failed our city.”

Fuertes was sexually assaulted and killed as she walked near her home in Queens, according to officials. A 21-year-old Guyanese national, Reeaz Khan, was arrested by the New York Police Department on Jan. 10 and charged with murder and sexual abuse.

He had previously been apprehended in November 2019 on charges of assault and criminal possession of a weapon after allegedly beating up his father.

However, Khan was later released, even though immigration officials filed a “detainer” request with the NYPD asking that he be turned over for deportation.

At the time of his arrest in January, Matthew Albence, the acting director of Immigration and Customs Enforcement (ICE), told reporters at a press conference in New York that the so-called sanctuary policies of the city were to blame for Fuertes’s death.

“Make no mistake, it is this city’s sanctuary policies that are the sole reason this criminal was allowed to roam the streets freely and end an innocent woman’s life,” Albence said.

“These policies, plain and simple, both here and elsewhere in the country, make all of us less safe, which is the opposite of what the primary goal of what every law enforcement officer, every agency, and every elected official should be.”

Albence said Fuertes’s death could have been prevented if city officials had complied with a federal request to turn over Khan for deportation. The NYPD, however, disputed those claims and said it didn’t obtain a “detainer in regard to this individual.”

Trump also blamed the “sanctuary city of New York” for Fuertes’s death during his State of the Union address last month, telling reporters that she would “still be alive today,” if New York had “honored ICE’s detainer request.”

“Tragically, there are many cities in America where radical politicians have chosen to provide sanctuary for these criminal illegal aliens. In sanctuary cities, local officials order police to release dangerous criminal aliens to prey upon the public, instead of handing them over to ICE to be safely removed,” he said.

On Feb. 13, Trump’s administration announced that it will be extending the national emergency on the U.S.–Mexico border for another year, to deal with the “humanitarian crisis that threatens core national security interests.”