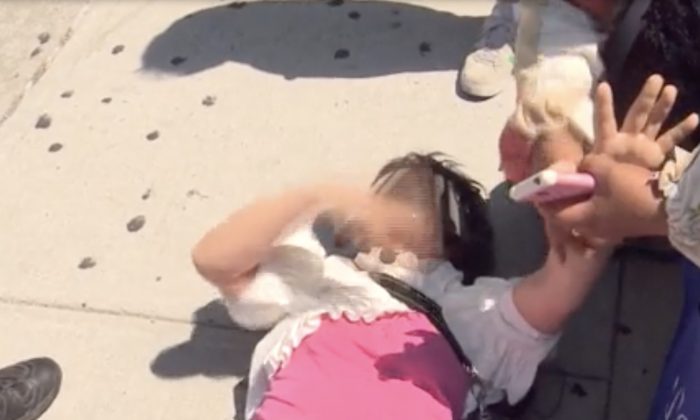 Fu Yuxia, 59, lies on the sidewalk outside the Chinese Consulate in New York after being assaulted by security guard Samuel Parkinson on July 1, 2014. (NTD Television)
China-US News

Fu Yuxia, a Chinese woman who was assaulted and injured three times by security guard Samuel Parkinson while she protested in front of the Chinese consulate in New York, has turned down a $3.5 million settlement offer by the defendants in a lawsuit she filed against Parkinson and his employer, Epic Security Inc.

Fu, 59, emigrated to the United States with her family in 2012 after her home in Shanghai was forcibly demolished in 1997 and her demands for justice were stonewalled. After moving abroad, she continued to protest the Chinese authorities by demonstrating outside the consulate in New York. Forced demolitions have been a common plight for many Chinese property owners, as real estate developers with political connections can seize land without providing proper compensation.

She had fought an uphill legal battle in China that saw her lawyers harassed and detained, before she fled the country to continue her petitioning oversees.

In May and July 2014, Fu, who applied for and received political asylum while in the United States, was assaulted by Parkinson while demonstrating outside the Chinese consulate. After recovering from her injuries, she went back to the consulate in 2016 and was beaten by Parkinson again, this time sustaining permanent damage to her neck and shoulder.

Fu filed suit in June 2016 after undergoing surgery. She’s unable to sue the Chinese consular authorities since they have diplomatic immunity. Since filing the lawsuit against Parkinson and his employer, Fu says that her lawyer has received incrementally higher settlement offers—first $5,000, then $70,000, $170,000, $1.5 million, and now $3.5 million.

Fu has refused each of the offers, saying that she had to stand up for other petitioners who have been assaulted by security staff at the consulate.

“My position is very clear. I am determined not to give in. I must go to court,” she said.

“There are 15 other petitioners who will appear in court and testify for me. Some of them are witnesses; the others are petitioners that have also been beaten by consulate security.”

On Nov. 27, Fu said that the defendants have tried to delay her lawsuit and are still putting pressure on her lawyer to accept the settlement.

Fu’s activism began in October 1997, when her and her father’s houses were forcibly demolished by the Luwan District authorities in Shanghai. Fu and her family were forced to find temporary housing as they sought redress for their case.

“My father’s house and my house were on opposite sides of the road. The government promised us that we could move back [at an affordable price] after the construction of the new buildings had been completed,” Fu said.

But the government didn’t fulfill the agreement, fetching handsome profits by selling the new condos to wealthy buyers. Fu began petitioning officials at all levels of government and sued the Luwan district authorities. She didn’t get far, as her attorney, Zheng Enchong, received tremendous pressure that obstructed the case. Zheng, a well-known human rights lawyer in Shanghai, has represented many local petitioners whose houses have been demolished.

In 2001, Zheng had his practicing license confiscated by the Shanghai authorities because he persisted in investigating businessman Zhou Zhengyi’s collusion with municipal and district authorities in Shanghai, in the demolition of homes and land seizures. In 2003, Zheng was arrested and sentenced to three years in prison.

Beaten Before the Chinese Consulate

Following Zheng’s arrest, Fu contacted the U.S. Consulate General in Shanghai to report the dangers she and fellow petitioners faced in their efforts for justice.

In February 2006, Fu and another petitioner, Chen Xiaoming, were arrested by the Shanghai police. Fu was detained for 50 days, and Chen received a two-year sentence. Chen died several days after her release, shocking Fu.

In 2012, Fu emigrated to the United States with her family and settled in New York, where she received political asylum.

She continued to speak out on behalf of herself and other Chinese who have been disenfranchised because of collusion between the Chinese regime and business interests. To protest, Fu petitioned in front of the New York Chinese consulate, where she has been harassed and beaten multiple times.

Footage from July 2014 taken by reporters from NTD, part of the Epoch Media Group, showed the security guard, Parkinson, beating Fu. Parkinson, who stands more seven inches taller than Fu, walked out of the consulate building on July 1, after Fu and other petitioners had finished their demonstration for the day and were walking on the sidewalk next to the consulate. Brandishing a baton, Parkinson first pushed a male petitioner out of the way, then shoved Fu in the neck and pushed her to the ground.

Fu said she felt a sharp pain in her spine, then lost control and feeling in her arms, which flailed about as she lay on the ground. The police and an ambulance arrived, and Parkinson was arrested on assault charges.

Fu had surgery to repair her neck and shoulder injuries and was unable to work for a year and a half following the incident, according to a doctor’s testimony.

Parkinson was released and has resumed his security work at the consulate. Other demonstrators have told NTD that Parkinson has used force against other petitioners from China.

On March 7, 2016, Fu was beaten by Parkinson for a third time when she went to protest at the consulate. Parkinson grabbed Fu’s previously injured arm, dragged her to the ground, and twisted her other arm while both were on the sidewalk.

Fu was injured again and received further surgery. This time, her shoulder and neck suffered permanent damage. In May, Judge Diccia T. Pineda-Kirwan of the Queens County Supreme Court registered her case. It is still in the pre-hearing stage.