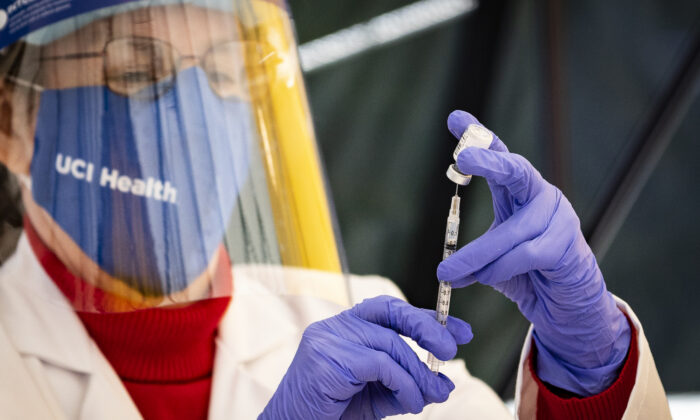 A COVID-19 vaccine administered in Orange, Calif., on Dec. 16, 2020 in a file photo. (John Fredicks/The Epoch Times)
Crime and Incidents

A 54-year-old woman from Long Island, New York, was arrested over the weekend for allegedly injecting what is believed to be a COVID-19 vaccine to a teenager in her home.

Laura Parker Russo, of Sea Cliff, is accused of administering a shot to a 17-year-old boy, who was not named, on New Year’s Eve without parental consent. Russo is not a physician or authorized to administer doses of the vaccine, Nassau County Police officials told the New York Post and other local media.

After the teen received the shot, he returned to his home and told his mother. The mother then notified the police that she did not give Russo permission to give the vaccine to her son, authorities told Pix11.

Russo was arrested on New Year’s Eve and was charged with unauthorized practice of a profession. She was released on a desk appearance ticket and is scheduled to appear in court on Jan. 21, police said.

“The mother had not given permission or authority to have her son injected with a Covid Vaccine and called police,” said Nassau County Police in a statement to the Daily Voice.

It’s not clear why the teen was at Russo’s home, and it’s also not clear what relationship the boy had with Russo. Other details about the case were not provided.

The Epoch Times has contacted the Nassau County Police for comment.

In recent months, there have been several reported incidents across the United States where a minor has received a vaccine without their parents’ consent.

A Los Angeles mother said n December that her 13-year-old son, who has asthma, was given the COVID-19 vaccine without her knowledge or permission. Maribel Duarte told local media her son came home from the Barack Obama Global Prep Academy in South Los Angeles with a COVID-19 vaccine card after he was administered the Pfizer shot in exchange for pizza.

“I should have been involved,” Duarte, who said she is vaccinated, told NBC Los Angeles. “The lady that gave him the shot and signed the paper told my son, ‘Please don’t say anything. I don’t want to get in trouble.'”

Duarte later explained that she does not want her son to receive the vaccine due to his asthma and added that he suffers from allergies.

Also in December, Florida mother Ariana Fraser said her 5-year-old daughter was given a flu shot at her school in Lake Worth Beach without her consent.

“We took the band-aid off and she had an injection mark, and on the paper it says she received a vaccination for a flu shot that we didn’t approve of and the paper is not her name,” Fraser told a CBS affiliate station.