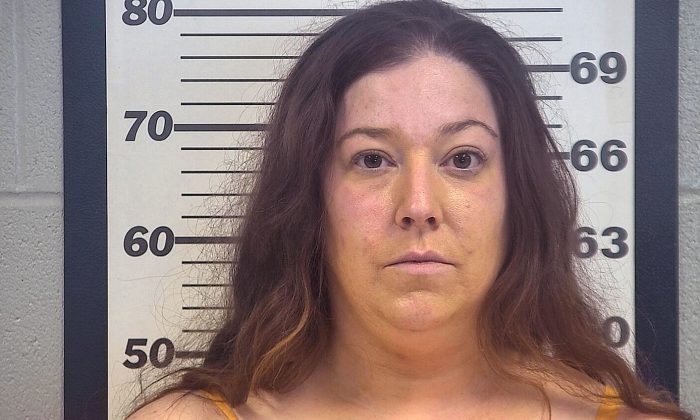 A Missouri woman is being questioned by authorities after she allegedly fired a gun at a Department of Motor Vehicles (DMV) shopfront on July 9.

Platte County Sheriff’s Office (PCSO) arrested Kansas City resident Vanessa Richey, 34, after she allegedly opened fire on a witness after she stormed out of the DMV.

Police investigate shooting at KCMO DMV – Suspect is in custody and no injuries reported but still a lot of chaos ⁦@fox4kc⁩ pic.twitter.com/2MyFruTIrv

That witness, Patricia Zick, told Fox4 that the shooting happened shortly after she took a number at the DMV and waited to be called to a customer service counter. That’s when she saw Richey rushing into the DMV, demanding to be served.

“She was belligerent from the moment she entered and was cussing and there were children there and elderly [people],” Zick told Fox4.

Zick also said that it was clear to her something was wrong with Richey.

“I don’t know what it is—drugs, mental or whatever—but she just insisted on getting taken care of immediately,” Zick told The Kansas City Star. “’The president’s security was in danger,’ she said.”

Richey quickly became frustrated by the lacklustre response to her demands and stormed out the building to return to her sports utility vehicle holding a purse in her hands.

“That bag bothered me,” Zick said. “Her sloppy purse and her attitude and her dressing, I mean, it was just a package deal that there could be something in there.”

Out of concern for the safety of others, Zick decided to follow Richey to her car, thinking she would report the license plate number to the authorities.

“I wasn’t afraid for myself as much as all the other people—the lady with the 3-year-old next to me and there was a baby in there.”

Zick said she didn’t realize she was in danger until Richey was pointing a gun at her.

“As soon as I was right behind her, she stopped and started fumbling in her purse and said ‘I’ll take care of this and the gun came out,'” Zick said.

Fortunately, two male witness—including a retired Kansas City police officer—forced Richey to the ground and one of them disarmed her, other witnesses said.

“Shortly before 11:30 a.m. the Kansas City Police Department and the Platte County Sheriff’s Office responded to a call of shots fired at the Parkville DMV located at the intersection of 64th Street and Cosby Road,” PCSO Major Erik Holland said in a statement. “No one was injured during the incident.”

.@kcpolice said no shots were fired and no one was injured.@ReganPorterTV is on the scene. https://t.co/8YfPhZMw3M

“Richey was taken into custody by officers at the scene and is currently held at that Platte County Detention Center,” Holland said. “The Platte County Sheriff’s Office is handling the investigation of the incident. At this time motive is unclear.”

Fox4 reported that Richey had been checked by doctors at a nearby hospital as a precaution.

.@ZacOnTV speaks with one of the men who stopped a woman with a gun at the DMV in Parkville Tuesday. He says he was thinking about his son when he intervened. https://t.co/WbdotrKvm4

Zick said she was relieved the woman was arrested before the situation escalated any further, and promised to spend more time with her husband and daughter.

Bystander who intervened in shooting at Parkville DMV recounts the incident https://t.co/LVt73dKvY8 via @ZacOnTV @fox4kc

The Kansas City Star reported that Richey was charged later that day with making a terrorist threat and unlawful use of a weapon.

Platte County Prosecutor Eric Zahnd said in a statement that when Richey stormed out of the DMV, she had threatened that she was going to get a gun.

She is being held on a $100,000 cash bond at the Platte County Detention Center.

She could be facing up to seven years in prison if convicted, Zahnd said.