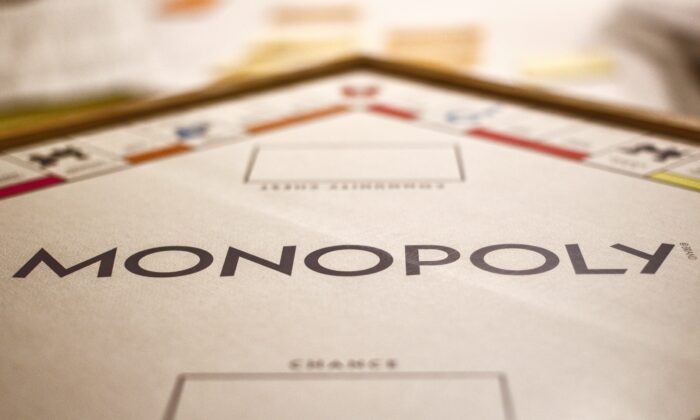 Woke Capitalism Is a Monopoly Game

In 2018, Ross Douthat of The New York Times introduced the phrase “woke capital.”

Others have suggested that corporations have gone woke only to be spared from cancellation by Twitter mobs and other activists, that wokeness is a good “branding tool,” or that progressive shareholders also demand corporate activism.

But woke capitalism can’t be sufficiently explained in terms of placating coastal leftists, ingratiating left-liberal legislators, or avoiding the wrath of activists. Rather, as wokeness has escalated and taken hold of corporations and states, it has become a demarcation device, a shibboleth for cartel members to identify and distinguish themselves from their non-woke competitors, who are to be starved of capital investments. Woke capitalism has become a monopoly game.

Just as non-woke individuals are canceled from civic life, so too are non-woke companies canceled from the economy, leaving the spoils to the woke. Corporate cancellations aren’t merely the result of political fallout. They’re being institutionalized and carried out through the stock market. The Environmental, Social, and Governance (ESG) Index is a Chinese-style social credit score for rating corporations. Woke planners wield the ESG Index to reward the in-group and to squeeze non-woke players out of the market. Woke investment drives ownership and control of production away from the noncompliant. The ESG Index serves as an admission ticket for entry into the woke cartels.

Research suggests that ESG investing favors large companies over small ones. Woke capitalism vests as much control over production and distribution in these large, favored corporations as possible while eliminating industries and producers that are deemed either unnecessary or inimical.

The investment approach of BlackRock Inc., the world’s largest asset manager; Vanguard, the second-largest; and others lend credence to this interpretation. BlackRock and Vanguard are solidly behind stakeholder capitalism—the corporate ethos of benefiting “stakeholders” in addition to or in lieu of shareholders.

In his “2021 Letter to CEOs,” BlackRock CEO Larry Fink made his position on investment decisions clear, declaring that “climate risk is investment risk” and “the creation of sustainable index investments has enabled a massive acceleration of capital towards companies better prepared to address climate risk.” Fink promised a “tectonic shift” in investment behavior, an increasing acceleration of investments going to “sustainability-focused” companies.

Fink warned CEOs: “And because this will have such a dramatic impact on how capital is allocated, every management team and board will need to consider how this will impact their company’s stock.”

In thus throwing down the stakeholder gauntlet, Fink echoed the menacing words of World Economic Forum founder and Chairman Klaus Schwab, who wrote in June 2020: “Every country, from the United States to China, must participate, and every industry, from oil and gas to tech, must be transformed. In short, we need a ‘Great Reset’ of capitalism.”

But unlike Schwab’s rhetorical gesturing, Fink’s dictum of “go woke or go broke” shouldn’t be dismissed as the conspiratorial rantings of Dr. Evil. It has the direct force of capital behind it. Fink carries out what Schwab can only promote with propaganda.

“Over the past three decades, I’ve had the opportunity to talk with countless CEOs and to learn what distinguishes truly great companies,” the letter reads. “Time and again, what they all share is that they have a clear sense of purpose; consistent values; and, crucially, they recognize the importance of engaging with and delivering for their key stakeholders. This is the foundation of stakeholder capitalism.”

According to Fink, stakeholder capitalism isn’t an aberration. He goes on to declare, rather defensively: “It is not a social or ideological agenda. It is not ‘woke.’ It is capitalism.”

Klaus Schwab erects the straw man of “neoliberalism”—which he equates with the free market—as the source of economic and social woes for the masses. But corporatism, corporate and state favoritism differentially benefitting chosen industries and players within industries—and not fair and free competition—has been the real source of what Fink, Schwab, and their ilk decry.

Corporatism, otherwise known as “economic fascism,” involves the coordinated production and the running of society by a consortium of dominant interest groups. If anything, stakeholder capitalism is a form of corporatism. Despite Fink’s assertion to the contrary, the corporatism that he promotes exercises corporate power and relies on state sanctions to achieve a particular ideological and political agenda. That agenda is wokeness. Woke capitalism is thus more accurately called woke corporatism.

Unsurprisingly, stakeholder capitalism has been seen by some conservatives, and even by a few socialists, as a new approach for advancing socialism. Yet woke stakeholder capitalism doesn’t advance state socialism as such. Rather, it tends toward corporate socialism. In extreme versions, it amounts to capitalism with Chinese characteristics—an authoritarian state ultimately directing the for-profit production of state-sanctioned corporate entities.

Corporate socialism has a long history, dating back to the end of the 19th century. I’ve written about this history in connection with the monopolistic and socialist ideals of one King Camp Gillette, the founder of the Gillette Razor Company. Gillette authored and funded the writing of several books to promote corporation-based socialism. He argued that socialism is best established by the corporation. Incorporation, mergers, and acquisitions would continue until all production is finally subsumed under one “world corporation,” with all “citizens” holding equal shares.

While this isn’t exactly the vision of contemporary corporate socialists such as Fink and Schwab, they’re no less presumptuous or contemptuous of the free market, and they use the rhetoric of diversity, equity, inclusion as a cover for their economic fascism.

Likewise, contrary to “correct” opinion, it isn’t reactionary to oppose woke capitalism. Economic fascism, in whatever form, is authoritarian and totalitarian. And, as Chinese leader Xi Jinping said in a recent address to the World Economic Forum, it isn’t “egalitarian.” It vests economic and political power in the hands of corporate and state elites, and it uses coercion and state power to concentrate the control of wealth in their hands—no matter how much they promise to redistribute it through “social justice.”

In addition to building parallel cultural, economic, and social structures in the short term, woke corporatism can be challenged by divestment from ESG-abiding corporations and by opposition to the politicians who promote these corporations through legislative favoritism.