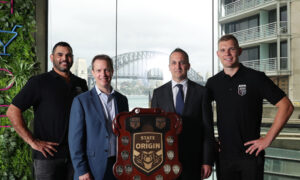 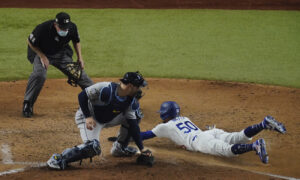 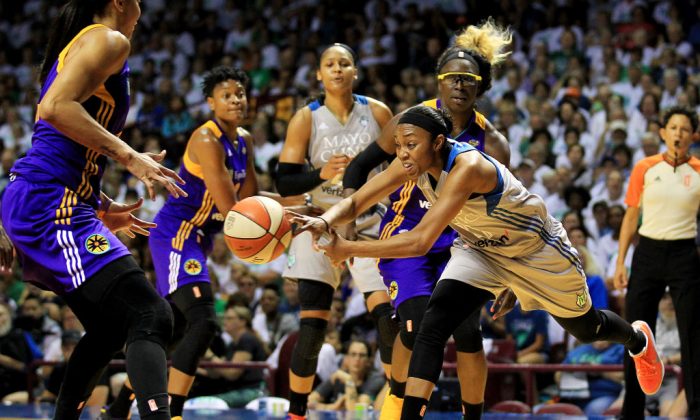 Renee Montgomery No. 21 of the Minnesota Lynx drives against the Los Angeles Sparks players Essence Carson No. 17, Alana Beard No. 0, and Candace Parker No. 3 while Maya Moore No. 23 of the Minnesota Lynx watches during the fourth quarter of Game One of the WNBA finals at Williams Arena on Sept. 24, 2017, in Minneapolis, Minn.(Andy King/Getty Images)
Sports

The NFL’s recent, controversial kneeling protests by players during the national anthem have somehow transferred over to the women’s NBA (WNBA).

The take a knee incidents were deemed controversial because many took it as a sign of disrespect to the American flag and those who fought for it. Others said it’s an inappropriate time and venue to protest.

During the first game of the finals on Sunday, Sept. 24, the LA Sparks refused to stay on court during the national anthem and instead walked off to stay in their locker room.

Their opponents, the Minnesota Lynx stayed on court but stood linking arms.

Below was the scene on court at the time.

The scene at Game 1 of the WNBA Finals. The Lynx link arms during the anthem, the Sparks stay in the locker room. pic.twitter.com/jckFULAvux

The LA Sparks not on the court for the anthem. #WNBAFinals pic.twitter.com/aafVMT58rP

The audience’s reaction to the Sparks was clear. They were booed as they walked off the court during the anthem, and were booed again when they came back onto the court.

Lindsey Thiry, a sports reporter for the Los Angeles Times posted a video on Twitter showing the crowd’s reaction as the Sparks returned to court.

Sparks booed as they retake the floor after the singing of the national anthem in Minneapolis. pic.twitter.com/upZTj4bDMb

Sparks booed as they leave the floor for the playing of the national anthem here in Minneapolis.

Prior to the game, the Sparks released a press statement explaining their decision to stay in the locker room.

“After careful and thoughtful discussion, the players of the Los Angeles Sparks unanimously determined that we would remain in the locker room in solidarity with the many players of the NFL who took part in demonstrations today all over the country,” the statement said.

Statement by @Nnemkadi30 @cgray209 and @jlav42 on the Sparks players' National Anthem protest prior to Game 1 of the WNBA Finals pic.twitter.com/AfGMrkDUJR

“We all have watched television today and our social media feeds and we know this is an interesting time in our country,” Borders said.

“Let me just say our commissioner, my colleague, and my friend Adam Silver put out a statement yesterday and I want you all to know that I personally believe all of us stand in full support with Adam, our big brother—the NBA—and our entire enterprise” she added.