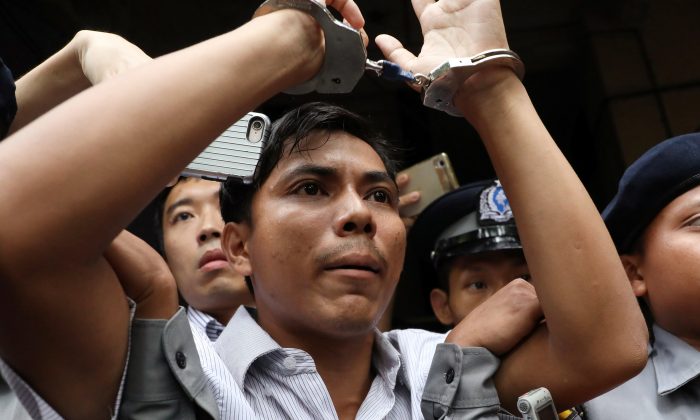 Wives of Reuters Reporters Jailed in Burma Call for Their Release

YANGON—The wives of two Reuters journalists in Burma jailed for seven years on official secrets charges insisted on Sept. 4, that the men were innocent and called for them to be released and reunited with their young families as soon as possible.

A court found the two journalists guilty on Sept. 4, in a landmark case seen as a test of progress toward democracy in Burma, which was ruled by a military junta until 2011.

Wa Lone, 32, and Kyaw Soe Oo, 28, were investigating the killing of villagers from the Rohingya Muslim minority by security forces and civilians in Rakhine State when they were arrested in December. They had pleaded not guilty.

U.S. ambassador to the United Nations Nikki Haley said on Sept. 4, that the United States would become more vocal about their situation.

Speaking at a news conference marking the U.S. assumption of the rotating chairmanship of the Security Council for September, Haley said the reporters were “in prison for telling the truth.”

On Sept. 3, she called for their immediate, unconditional release, saying it was “clear to all that the Burmese military has committed vast atrocities.”

“In a free country, it is the duty of a responsible press to keep people informed and hold leaders accountable. The conviction of two journalists for doing their job is another terrible stain on the Burmese government,” Haley said.

Both reporters have young daughters and have not seen their families outside of prison visits and court hearings since they were arrested in December.

The wives, alongside Wa Lone’s brother, Thura Aung, and their defense lawyers, spoke to reporters at a news conference in Yangon on Sept.4.

The defense can appeal the conviction, and the lawyers told the news conference they were considering all options.

Kyaw Soe Oo’s wife, Chit Su Win, said she had expected the two reporters to be acquitted on Sept. 3.

“I believed that we would be able to go home together,” she said, adding that later she “almost went crazy.”

“They are innocent. They were doing their jobs as journalists,” Chit Su Win said, She said she feared their daughter, Moe Thin Wai Zan, would be traumatized by the ordeal.

Wa Lone’s wife, Pan Ei Mon, said she wanted the journalists to be released “as quickly as possible.”

“I never thought such a harsh verdict would be handed down,” she said of the seven-year sentence.

“Since I became pregnant, I stayed strong on the hope that Wa Lone would be released. After yesterday’s verdict, if feels like my hopes have been destroyed.”

Pan Ei Mon said she was disappointed that Burma’s government leader, Nobel laureate Aung San Suu Kyi, had appeared to speak against the reporters ahead of the verdict.

Suu Kyi told Japanese television station NHK in an interview in June that the reporters were not arrested for their reporting on Rakhine, but because they “broke the Official Secrets Act.”

“I am really sad about that…the person who we really admired for our whole lives misunderstood us like that,” Pan Ei Mon said.

Neither Suu Kyi nor her government’s main spokesman have commented publicly on the case since the reporters were convicted.