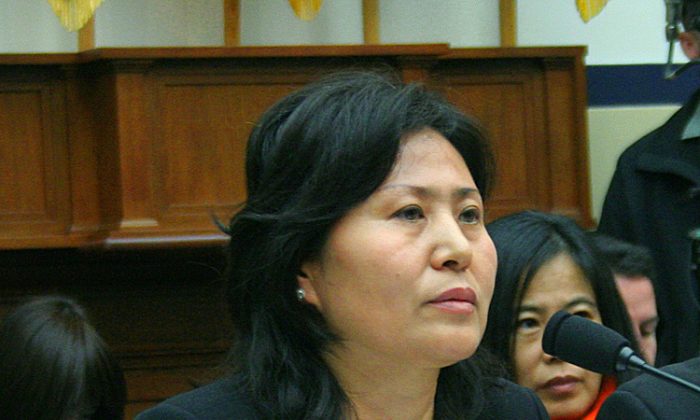 Jared Genser (left) greets Congressman Chris Smith (R-N.J.), Chairman of the Congressional-Executive Commission on China. Genser is the founder of Freedom Now, which works to free prisoners of conscience worldwide. The hearing was held Feb 14 on Capitol Hill. (Gary Feuerberg/The Epoch Times)
US

Wives of Chinese Dissidents Tell Their Stories to Congressmen

WASHINGTON– As President Obama was welcoming Chinese communist leader Xi Jinping to the White House on Feb. 14, the Congressional-Executive Commission on China (CECC) was holding a hearing on imprisoned human rights lawyer Gao Zhisheng, who has become a cause célèbre for human rights. The Commission heard testimony from two wives—Geng He, wife of disappeared Gao, and Li Jing, wife of imprisoned democracy advocate Guo Quan. Both are seeking United States support in the release of their jailed husbands.

Rep. Chris Smith (R-N.J.), Chairman of CECC, said, “I hope that President Obama doesn’t put human rights last on the agenda—or not at all—as he did when Chinese President Hu Jintao visited the White House on January 19th, 2011.”

Sen. Sherrod Brown (D-OH), Co-chairman, also noted the high levels meetings in town: “As Chinese Vice President Xi Jinping attends meetings just minutes away with our top officials, we are reminded that the real China is represented by the brave individual whose fate remains a mystery and who is the focus of today’s hearing.”

Guo Quan was a professor at Nanjing Normal University, who published an open letter to President Hu calling for multiparty elections. He wrote public letters to top government leaders defending the rights of workers laid off, demobilized soldiers, and displaced farmers. He called for the end to China’s notorious reeducation through labor system.

Because of the letters, Guo lost his university professorship and was expelled from the China Democratic League, a state-approved “democratic” party under the direction of the Communist Party.

“From the first published letter, my family experienced continuous harassment by police. Our lives have been turned upside down for the simple expression of political opinion. Our home was raided several times in the middle of night. They smashed the locks on our door, ransacked our cupboards and chests, and forcibly confiscated our computers and some of my husband’s manuscripts, which were never returned,” testified Li Jing, Guo’s wife.

In Dec. 2007, Guo announced the formation of the China New Democracy Party. “Authorities detained Mr. Guo and sentenced him in Aug. 2009 to ten years’ imprisonment for ‘subversion of state power’ for organizing an ‘illegal’ political party, for recruiting members for the party, [and other subversive acts], said Rep. Chris Smith (R-N.J.)

Mr. Guo is serving out his sentence in a Nanjing prison. His wife Li Jing and 11-year-old son fled from China, and have been in the United States for only three weeks.